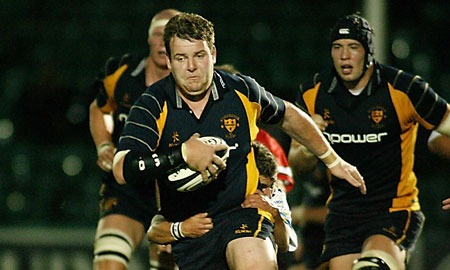 This wasn’t Cardiff, not by a long chalk, but Warriors went a long way to banishing their South Wales blues with a victory marked by fast, intelligent running and, for the most part, hard-hitting defence.

Apart from an 11-minute period at the start of the second half, when the Italians threatened a comeback with three unanswered tries, Worcester dictated the pace of their penultimate pre-season friendly and were good value across the pitch.
The pick was Marcel Garvey, who bagged three tries, the first before the clock had ticked past one minute, the last as the final whistle neared. Both of them, and the one in between, owed everything to speed of the cross-field handling that set them up and the little winger’s hip-swivelling, killer finish.

But none were the best of the night. That prize fell to Lee Best as he put Warriors 24-0 up in a rampant first-half. He finished off a 90-second phase of perpetual motion that started with Pat Sanderson’s line-breaking run and passed through just about every pair of Worcester hands before the full-back accepted Thinus Delport’s invitation to touch down. It would have graced any occasion.

Warriors were 38 points up at half-time, with Delport, Tom Harding and Chris Horsman’s efforts adding to the domination. But it wasn’t without some cost. Scrum-half Ryan Powell looked fast and hungry before he turned an ankle on 23 minutes, and Horsman – playing his first game since the ankle surgery that killed his season last Christmas – retired with a mouth injury sustained in a ruck.

It was the Italians’ abrasive pack that gave a whiff of salvation at the start of the second half in closing the game to 38-21. Twice they went over from short distance, fly-half Andrea Scanavaca burrowing in first and giant lock Ben Gissing rolling in the second.
Warren Spragg grabbed a 60m interception try as Warriors threatened, but a raft of replacements broke their rhythm and momentum, and flanker Tom Harding finished off a move created by Dale Rasmussen’s midfield ram-raid.

Then came Garvey’s late finale, a fitting end to a confident performance with Bristol’s visit for the opening Guinness Premiership match at Sixways just eight days away.

“It was pretty satisfying performance. The first half was the best rugby that we’ve played during our trial period” – head coach Anthony Eddy

“It was good to have Dale back in the centres. He’s a class act, Dale. Apart from being a good attacking weapon for us he seems to be able to hold our defence together” – head coach Anthony Eddy

“You can’t beat genuine speed, can you, and Marcel ran some fantastic angles and held his lines and did a really good job. Good to see” – head coach Anthony Eddy