The training session was the brainchild of Warriors Academy Manager Andrew Stanley who hopes to build up a sporting partnership with Wolves to mutually benefit both clubs.

And Warriors coach Douglas admitted the session had allowed the Sixways youngsters a break away from the normal rugby routine.

“It was good to give the players a change of scenery and there is also a clear cross over in terms of ball handling skills,” he said. “Ball familiarisation, hand to eye co-ordination and the different types of passing was all useful to learn… even if some of the players struggled with the idea of throwing the ball forward.

“It was more aerobic than the players are familiar with and a real tough workout as well as an enjoyable experience. The feedback we had from the players has been brilliant and we are keen to develop a relationship with Wolves that will benefit both clubs.”

The Warriors started the session with dynamic stretching before moving onto handling skills and offence and defence drills. The young rugby players then got to show their eye for the basket with passing shooting exercises. including a five-man weave and circle rebound drills.

Wolves head coach Cooprider said: “I had a really good time working with the Warriors and I’m sure they got a lot out of the session too.

“Andrew Stanley originally approached us about the guys coming here and developing a link between the two clubs. We’re delighted by this and will be looking to take it even further. Worcester Warriors are the top sporting club in the city in what is a great area for sport. If all sporting organisations can work together that has got to be a real positive.

“Basketball and rugby may seem worlds apart but there are actually a number of skills that cross over both sports, with that in mind the players seemed to enjoy themselves as well as having a very serious and gruelling training routine.

“The guys all worked really hard. You could tell they were elite athletes because of the fitness levels they had and also the hand to eye co-ordination, some of them took to what they were being taught very quickly indeed. However, I doubt we will be recruiting any to the Wolves team just yet!

“Now I would just love to see the Wolves up at Sixways to get a real physical edge to their training and some toughness before next season.” 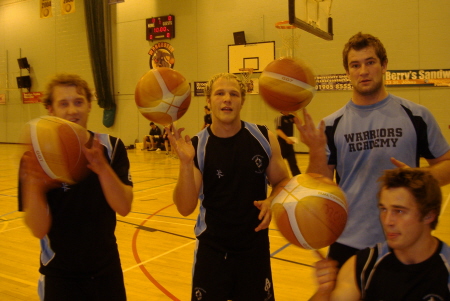