Samoa star Loki Crichton has hailed the “positive vibe” in the Warriors camp just days after the new signing arrived to start his new life at Sixways.

The dynamic and versatile back has jetted into Worcester after his eye-catching involvement with Samoa in the Pacific Six Nations as he bids to get some pre-season training under his belt and his two-year deal rolling.


Crichton is one of six new faces who agreed to join the Mike Ruddock revolution ahead of the new Guinness Premiership season that kicks off in less than two months.

And Crichton, who has previously played for Chiefs in the Super 14 competition and Waikato in the Air New Zealand Cup, is convinced he has already made the right decision as he settles into his new surroundings.

“There is a real positive vibe around the club, I have only been here a few days but you can feel it, it’s exciting times for everyone,” he said. “We have got a really strong squad here and hopefully things will come together and we will have a good season.

“I have actually seen some of the new signings up close and personal when Samoa played the Junior All Blacks in the Pacific Six Nations. I came up against Greg (Rawlinson), who is a big lad, and Rico Gear. I saw firsthand what they can do – it’s good news for the club!

“I’ve taken the chance to come over here until the end of the month before I go back into camp with Samoa for 10 days. After that I’m back again for a few pre-season games before I jet off again. There is pretty no point unpacking the bags at the moment but it’s a great time for me with the World Cup looming on the horizon.

“I have only been at Warriors a few days now but I already know I made the right decision coming here.

“In my mind it was an easy decision to join Warriors. I was looking at other clubs plus offers from Japan, but I decided that Worcester was a challenge that excited me that I wanted to take on.”

Crichton has already been into Sixways for extra training sessions and admits getting into top condition for the World Cup and the season ahead with Warriors is a big priority.

And he revealed he has had plenty of friendly faces to keep him company and help him settle in.

“I know a few guys here so that makes the move a lot easier on me and my family,” said Crichton.

“I’ve played with Big T (Tevita Taumoepeau), Aleki (Lutui), Dominic (Feaunati) and Dale (Rasmussen) before plus Ice (Aisea Havili) when he has been with Tonga. Plus my wife knows Aleki and Dale partners so the family can settle in.

“It’s a nice city and I’m happy that my family have moved here, we are all looking forward to the future.”

Before Crichton can launch into Guinness Premiership action he first has a dream ticket to the World Cup in France with Samoa to look forward to as part of a 30-man squad named by his country.

Samoa have been pooled with South Africa, England, Tonga and the US in France, but coach Michael Jones is not daunted.

And Crichton is determined to excel on the biggest stage and give Warriors fans an early glimpse of what they can look forward to watching.

“The World Cup is so exciting,” Crichton added. “It is my first time and that is such a special occasion for any player.

“Dale, Aleki and Dom have all been there before and reckon it is an awesome atmosphere, the whole world pretty much watches rugby at that time so you have got to relish that.

“I was pleased how I recently played in the Pacific Six Nations, I’m just thankful my name came out of the hat for the big one.

“But as well as the World Cup I’m also looking forward to pulling on that gold and blue shirt for the first time and becoming a Warrior, that will also be special for me.”

Crichton, of course, needs little introduction to Worcester supporters after his spell at Guinness Premiership rivals Newcastle Falcons and his role in the memorable clash at Sixways last season.

But the international admits he always looks back at the positives from that fixture and is eager to repeat the form that saw him produce a first half master class when he makes his Warriors debut.

“I know all about the Sixways crowd – hopefully this time they will cheer for me,” joked Crichton.

“But it was a great atmosphere that night and I really enjoyed that game, looking back it was such an exciting game, what rugby should be all about. It’s just too bad it came down to that kick at the end.

“I know I can go out and show what I am capable of next season, I want the fans to enjoy watching me play and I’m here to get results for them.”

Director of Rugby Ruddock has already hailed Crichton as a player who can make a big impact with a “good all-round game with tackling and passing of the highest quality”.

And the versatile back admits, after only a few days under his guidance, he has been impressed by the new main man at Sixways.

“I have only been here a very short time but you can’t help but be impressed by Mike Ruddock,” he said.

“You can see the type of plan he has got for the boys and with the players we have got here we believe we can achieve his ambitions for a good season.” 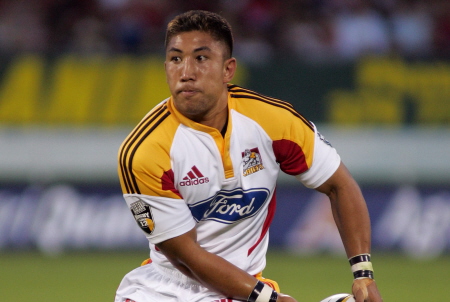