Mike Ruddock has paid tribute to the form of Marcel Garvey as the wing wonder prepares return to former club Gloucester on Saturday (kick-off 6pm).

Garvey grabbed a stunning try against London Wasps and was impressive in defence and attack throughout the clash with the European champions.


The England Sevens international star admits he is enjoying a new lease of life at Sixways under the guidance of Ruddock and back room team Clive Griffiths and Billy McGinty.

And Director of Rugby Ruddock is now looking for Garvey to put on another impressive show when Warriors clash with Gloucester in front of the Sky cameras on Saturday evening.

“We’ve got to give a lot of credit to Clive and Billy for the work they’ve done with the backs’ skills and Marcel seems to have bought into what we are after,” said Ruddock.

“I was delighted to see him get his try with a kick and chase in the first half against Wasps because there was a similar episode against London Irish when the ball bounced away from him at the last minute.

“We are trying to get the ball into his hands and create opportunities for him and he seems to be very upbeat about the way we are playing.”

Ruddock is also confident that Garvey can recapture his form of just a few seasons ago when he was even tipped for an England call-up.

“I remember that spell with Gloucester when he was outstanding and now he is once looking very, very threatening every time he gets the ball in his hands,” added Ruddock.

“He is starting to get some form and go looking for work – which is what we want – and he is very dangerous in the one-on-ones as he showed with his try against Wasps.

“Marcel defended very well and made a fantastic tackle in the second-half to turn the ball over and we’re pleased with that too. Hopefully he’ll continue to get better and improve.” 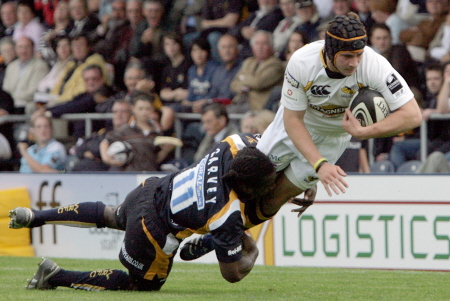