Worcester Warriors are delighted to announce that highly-rated youngster Graham Kitchener has extended his current contract by two-years to commit his future to Sixways Stadium until 2010.

Lock Kitchener is rated as one of the most promising young players on the books at Warriors after impressive displays for the Academy and in the Guinness ?A? League.

The 18-year-old ? a product of the Adams Grammar School in Shropshire – has regularly attended the EPDG satellite centre at Telford College of Arts & Technology due to the distance between the club and his home, where he was worked with Worcester coaches Dale Smallman and Paul Young.

The athletic forward, who is 6ft 6in and 16st 13lbs, has been connected with the club since he was 14 and has represented North Midlands and England at U16 and U18 level, most recently in the Six Nations Festival.

Kitchener ? one of the star performers as Warriors defeated Sale Jets in the Guinness A League on Monday night – had attracted attention from other high profile Guinness Premiership clubs.

But he always stated his desire to remain at Warriors and has now pledged his future development by putting pen to paper on a two-year extension to the delight of Academy boss Andrew Stanley.

?We are delighted that Graham has committed his rugby future to Warriors and continues the relationship he has had with us since he was 14,? said Stan.

?I?m sure Worcester supporters will have been impressed with his performances against Bristol and Sale and the skills levels and maturity he has shown for somebody so young.

?Graham joins a group of young English players at the club that we hope will be playing a significant part in Warriors future development.?

Director of Rugby Mike Ruddock added: ?I?ve been very impressed with Graham since I first saw him play for England against Wales U16s and one of my sons a few years ago.

?We have just introduced a mentoring scheme at the club and our plan is that New Zealand international lock Greg Rawlinson will be his mentor. I?m sure that will assist him make quicker progress to the first team and international honours.

?We?re delighted he has decided to remain at the club as I know he had attracted lots of interest from other top-flight clubs.? 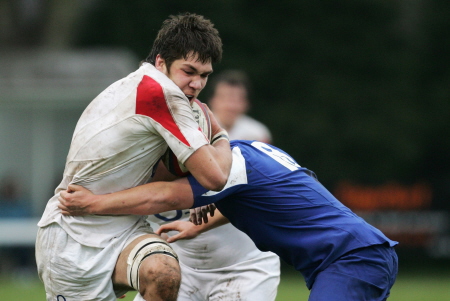