The historic local fixture of passion, commitment and desire – between the two U18 teams – lived up to its star billing with a fantastic atmosphere inside the stadium.


Both schools sold hundreds of tickets to pupils and parents who packed into the stands to make the occasion a memorable one.

On the pitch the action lived up to the electric atmosphere with the RGSAO claiming victory by edging out their rivals 20-12, in a very hard fought contest that could have gone either way.  Large periods of the match were spent with only 1 point between them, with moments of genius moving the match forward.

It was a match where the teams individual strengths counted; with the power of the RGSAO forwards dominating, through their deadly driving mauls and the light footed, sheer pace of the King’s backs, always creating a potent threat to RGSAO .   The match highlighted the importance of team work and how a unit is stronger than the individual.

With the final whistle gone, there was a clear divide of jubilation and despair in the camps, but both teams must be proud of their achievements on the night and the spectacle they created with Warriors help.  A feeling supported by the magnificent supporters in attendance with both sets of fans, putting teams aside and joining forces by clapping and cheering the teams off the park.

Even raising the roof off Sixways Stadium with a deafening roar, when Clive Griffiths, Warriors Head Coach and Roger Marshall, Managing Director of event sponsor Modus Creative handed the Modus Challenge Cup over to the winning RGSAO skipper Elliot Bee, in front of his team and the thousands in attendance.

A great united end, to a trilling day of passionate and committed rugby.  A true ‘night to remember’ for everyone at Sixways. 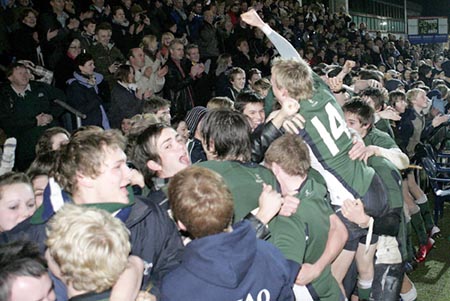 Will Owen called up by England Under-18s