Sixways Stadium, home of Worcester Warriors and Sixways Events, is undergoing a huge summer revamp with the creation of a new East Stand – and judging by this picture even Mother Nature is smiling down on us!

Chairman Cecil Duckworth OBE took a select party of guests into the new stand last week to give them a VIP tour of the new facilities that will soon be on offer at Sixways Stadium. And it was certainly a case of ‘somewhere under the rainbow’ judging by this picture!


The new £8 million stadium continues to take shape at real pace and over the last week the development has seen:

Cladding work to the rear of the East Stand is nearing completion and the cladding above the boxes is also close to being completed. The underside cladding to the second floor has also been installed.

The corner block steels are now almost entirely in place to give supporters a first real taste of the size of the entire structure being created at the home of the Warriors.

Stairwells have gone in on the new corner block and steel work continues.

Internal stairwells in the East Stand are continuing to take shape and concrete has now been poured to the south end of both the first and second floors.

The cantilever roof on the new East Stand nears completion with only the clear front of the roof to now be installed.

Laser continuing snagging work around the complex and a new fence will now be erected around the perimeter of the stadium by Pershore Lane. Laser will continue to clean up the roads and surrounding areas and hope to be off site by the end of the month.

The underpass is nearing completion with tarmac going on. Bunding work continues around the site and the new training pitch is clearly visible to the left hand side of Pershore Lane as you drive past Sixways. 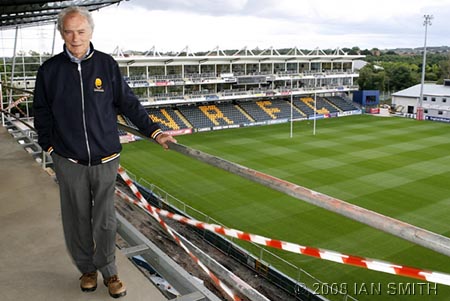