Warriors boss Mike Ruddock insisted his side were on course for a positive start to the season after watching his troops make it a hat-trick of pre-season victories with an impressive 23-10 victory over Ulster at Ravenhill.

After recent morale boosting wins over Doncaster Knights and Moseley, Warriors stepped up a level with the game against the Irishmen in Belfast.


But Worcester gave another indication that they are on course for the start of the Guinness Premiership season in less than two weeks with a three-try win.

Will Bowley, Netani Talei and Matt Powell all crossed for tries while Matthew Jones and Loki Crichton added points with the boot and Chris Latham made his debut on a night of positives for Warriors in Northern Ireland.

“We are very pleased with a steady performance, we were very workmanlike against a ferocious Ulster side,” said Ruddock.

“We battled hard and looked comfortable all the way through the game and in control. Although we conceded a try late on by then the game was won. We’re disappointed to concede but we were never in danger of losing the game.

“We took our chances well and scored two great tries through Netani and Will. It was a really positive performance as we look ahead to our game with Northampton.”

Much of the attention was on Latham as he made his long awaited debut after his summer move from Queensland Reds and the full back impressed his new boss.

“I thought he was quite outstanding,” said Ruddock. “He showed a good range of skills, as you would expect from Chris Latham, and he could have scored a glorious try only to be pulled back for a forward pass.

“He showed great awareness and really fitted in well with the rest of the team.”

Warriors now complete the warm-up campaign with a game against Cambridge on Saturday and Ruddock is confident his starting line-up is now really taking shape with the trip to Franklins Gardens fast approaching.

“We’re not kidding ourselves; we have played two first division teams and they won’t be at the same level that we can expect from Saints,” he added.

“But we put our best 25 players on the park and impressed, we have good reasons to believe we are on course to make a positive start to the season.” 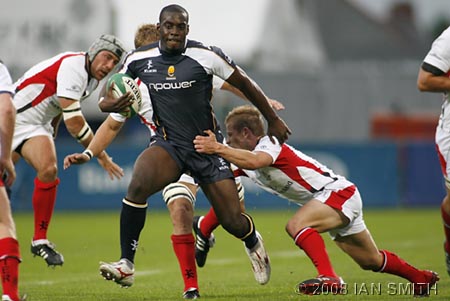