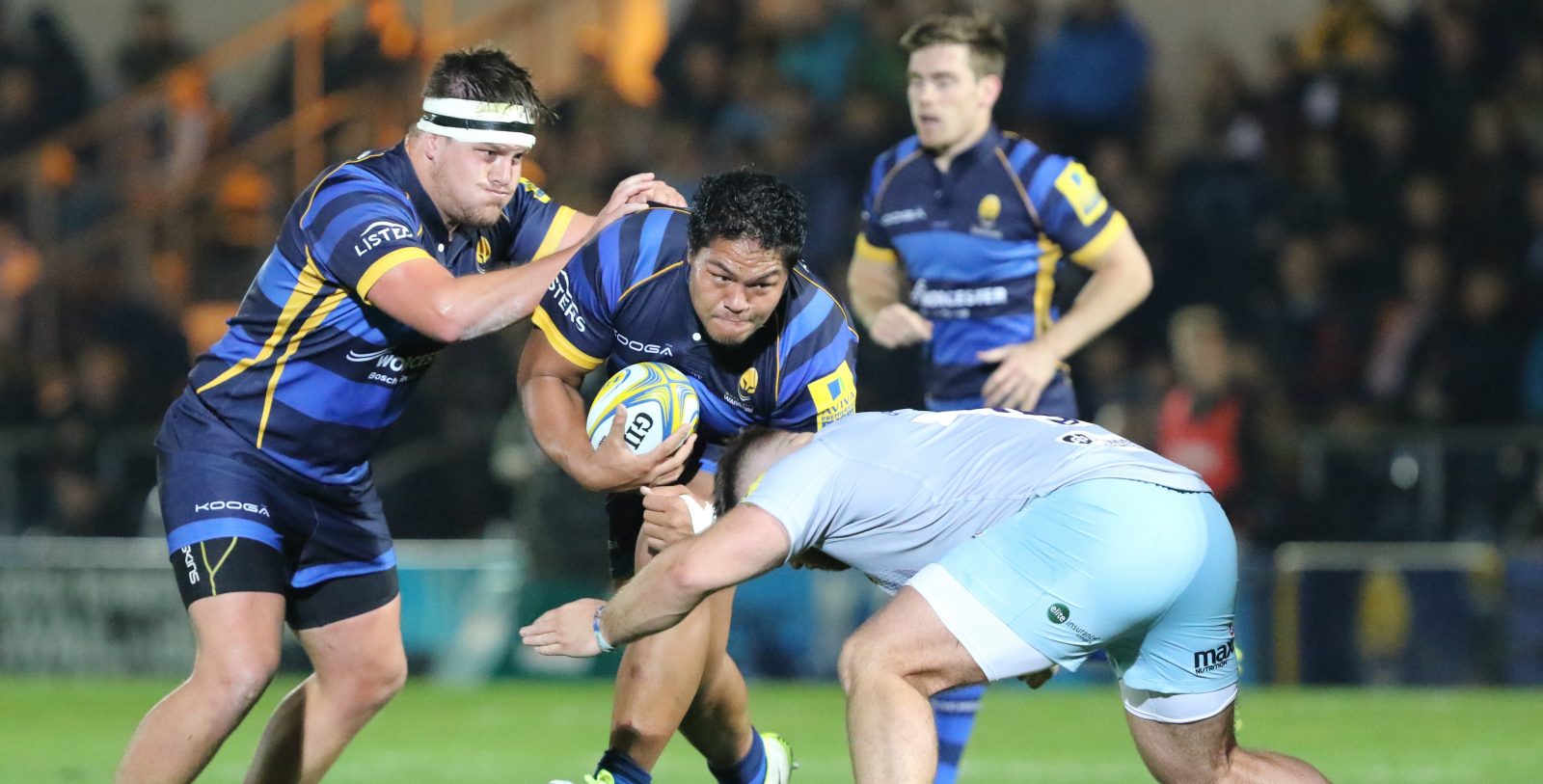 Tom Heathcote became an instant Warriors hero after landing a last-minute drop goal to earn his side a memorable victory against Northampton Saints on their first game back in the Aviva Premiership.

In a remarkable finish, it looked as though Warriors would lose the opener after Stephen Myler slotted his fourth penalty of the night to give his side a two-point lead with one minute remaining.

Warriors had earlier fought back from a 6-0 deficit after the boot of Myler landed two penalties but Heathcote’s three points and GJ van Velze’s converted try sent them in with a half-time lead.

Warriors thought they’d been punished for four missed penalties when Myler got Saints back into it but the late drama ensued with Heathcote snatching victory at the death.

The new-look Warriors looked sharp from the off and quickly switched the ball wide before Cooper Vuna attempted a chip-and-chase down the left flank but his kick went into touch.

However, the 2013/14 Aviva Premiership champions took an early lead when Myler punished Warriors for giving away a penalty.

Worcester were soon put under more pressure when Saints came flying off the line to tackle Tom Biggs and the hosts were penalised at the breakdown allowing Myler to chip over another three points.

Chris Pennell looked the part as he showed no signs of early nerves under the high ball and won Warriors a penalty which Heathcote kicked to the corner.

And the hosts nudged themselves closer and closer to the tryline with the crowd roaring them forward but they had to settle for a penalty which Heathcote slotted to get Warriors on the board.

Ryan’s men then showed slick handling by flinging the ball out to Biggs who darted down the right channel putting pressure on Saints, but the visitors weathered the storm to clear the danger.

Warriors then conceded a penalty on halfway which Myler kicked deep into the 22 to put Warriors on the backfoot but the hosts defended astutely to deny Saints a try.

Myler continued to kick for field position and although Saints pinched the ball at the lineout inside the Warriors 22, Ryan’s side managed to keep them at bay.

Warriors continued to fight last season’s table-toppers but after kicking to the corner they missed an opportunity as the visitors won back possession and cleared away.

A vociferous home support got behind Warriors as Jonny Arr’s low kick caused Ken Pisi to knock-on, allowing Warriors to attack from the resulting scrum.

And after sliding the ball out wide, skipper Van Velze raced over the line and Heathcote slotted the conversion from the angle.

The hosts then had the wind in their sails and flung the ball out wide once again as Vuna almost reached the whitewash and despite the pack trying their best, they couldn’t force their way over.

And although they were awarded a penalty and kicked for the corner, Warriors were unable to capitalise on their territory and Saints won a penalty to diffuse the momentum.

Jim Mallinder’s side ended the first half on the front-foot but it was Warriors who had the lead 10-6 at the break.

But the Saints came marching out in the second period, forcing Warriors into an early error and after winning a penalty at the scrum, Myler dispatched his third kick at goal to put the visitors within one.

Worcester then won a penalty 40 metres out and Heathcote fancied his chances at goal but his kick drifted wide of the posts.

Lee Dickson’s poor box kick went straight out of play and Warriors enjoyed a fine spell of possession from the resulting lineout before full-back Ben Foden was forced to call mark and Saints cleared to touch.

And although Ryan Mills’ kick went out on the full, Worcester pinched the lineout and were straight back at the visitors – and another Arr kick trickled out of touch in the corner.

Northampton, under pressure again, were forced to kick out only as far as the 22 and the Sixways side drove forward.

However, despite the home support trying to drive their team over the line, they were penalised, allowing Saints a chance to escape.

But Warriors won a free-kick inside the away 22 before conceding a penalty at the scrum and this time, the visitors did hoof away.

Mallinder’s men then surged downfield in search of regaining the lead but Worcester showed resilience in defence and were rewarded with a penalty.

The pack drove ten metres from the lineout and soon had a penalty given for a high tackle by former Warrior and England international Dylan Hartley who had ex-teammate Dowson in a headlock.

Warriors continued to play some fine rugby, with Pennell and Vuna super under the high ball and after Olivier and Dowson broke through the Saints defence, Kahn Fotuali’i conceded a penalty.

But Heathcote couldn’t add the three and Saints survived another scare.

The crowd were roaring after another high tackle on Van Velze, and so another penalty was awarded to the hosts after being referred to the TMO.

But somehow Heathcote missed again despite being in a fairly straightforward position.

Some huge collisions ensued as Saints looked to break the Warriors line of defence but the visitors committed a mistake allowing Worcester a chance to escape with possession at the scrum.

Warriors continued to be fantastic in defence, especially Biggs out wide who grinded out tackle after tackle but with just two minutes left on the clock, Saints were awarded a penalty allowing Myler a chance to steal the win.

And the fly-half’s kick just dropped over the bar to edge Northampton ahead.

But in the last play of the game, Warriors won possession and set-up for the drop-goal, and Heathcote’s kick sailed through the posts to send the Sixways crows into delirium.