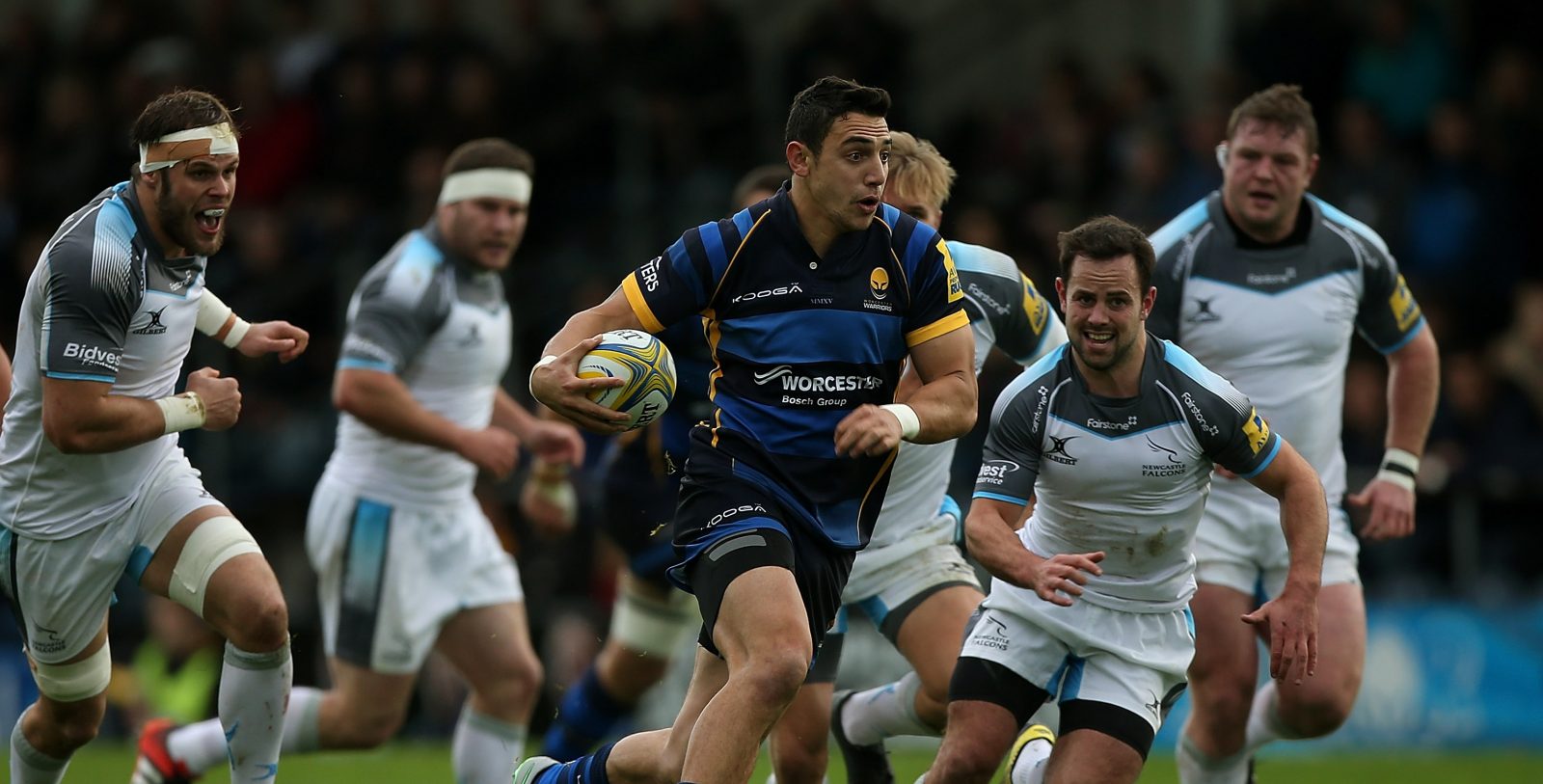 A sensational first-half performance saw Warriors claim their second victory of the season against winless Newcastle Falcons at Sixways.

An inspired Alex Grove raced over for two tries on his return to the side, after scores from Chris Pennell and Bryce Heem had put the hosts in the ascendency.

Michael Young and Tom Catterick had kept Newcastle in the game with tries before the break before the hosts were forced to weather the storm in the second-half.

Warriors were unable to add to their tally in the second period but restricted Newcastle to a single penalty as the hosts battled to a 28-20 win.

Warriors started in emphatic fashion and went ahead after just five minutes, courtesy of Pennell.

New boy Heem, who only arrived at Sixways at the beginning of the week, broke his way through the Newcastle defence before offloading to the right.

The ball was eventually played to Pennell in acres of space on the right, and the England man strolled in to open the scoring.

Tom Heathcote converted from wide before Newcastle fly-half Mike Delany had a chance to reduce the deficit with a penalty just outside the 22.

Delany saw his effort smash back off the post but Newcastle won a five-metre scrum after Warriors took the ball behind their own line.

Newcastle won possession and went through phase after phase as they searched for a way to the line.

Cooper Vuna and Pennell bundled Giamba Venditti into touch as he looked sure to go over but Warriors’ relief was short-lived as moments later Newcastle found themselves in the Warriors 22 once again and finally went over for their first try of the afternoon as Young got on the end of an offload to dive over.

Both sides battled for the early possession but it was Warriors who looked the more likely to score a second and they did just that as Pennell unleashed Heem midway through the first-half.

The Kiwi gave his opposite number no chance as he raced down the right before sliding over the tryline for a sensational score. Heathcote again converted as Warriors cruised to a 14-7 lead.

Warriors were showing flair in attack and tenacity in defence as they illustrated some of their best form of the season.

And that hunger saw Ryan Mills and Heem bundle giant lock Mouritz Botha into touch as he made ground down the right.

Warriors were enjoying a dream start and had their third try of the afternoon just before the half-hour mark as the backline once again proved too hot for Newcastle to handle.

Cox fought hard to get out of his own 22 before Heathcote found the ball on the left.

The fly-half offloaded on the halfway line and Grove raced 50 metres down the wing before grounding underneath the posts to put daylight between the two sides.

Delany kept Newcastle’s score ticking over with a well-taken penalty but the first-half was all about Warriors’ dominance as Grove gave the hosts a try bonus point with his second and the side’s fourth try of the afternoon after 37 minutes.

It would have been an almost perfect first-half performance if the hosts had not let Newcastle back into the game with the last play of the half.

With time up on the clock Juan Socino and Delany exchanged passes to make their way to the Warriors tryline before replacement Catterick finished off the move.

That score, with Delany’s conversion, kept Newcastle in the game as Warriors went in 28-17 ahead.

The second period began with both sides kicking high into the air as they looked to force a mistake.

Newcastle, who had handed kicking responsibilities to Catterick, added another three points to the board courtesy of the replacement’s strike as they looked for a way back into the game.

Warriors were not dominating to the extent they were in the first-half but the hosts looked resilient every time Newcastle had the ball.

As the match entered its latter stages Ryan’s men started to keep hold of the ball and drive their way forward but Newcastle were forcing penalties at every opportunity as they targeted a losing bonus point with one more score.

Still, Warriors clung to the ball and refused to give up possession as time began to run out for the visitors.

Ryan Lamb saw a late penalty drop just wide before Warriors found themselves with a put-in at the scrum as the clock ticked past zero.

Newcastle won the penalty and raced down the left before Heem managed to intercept a loose pass into touch as the referee blew for full-time.