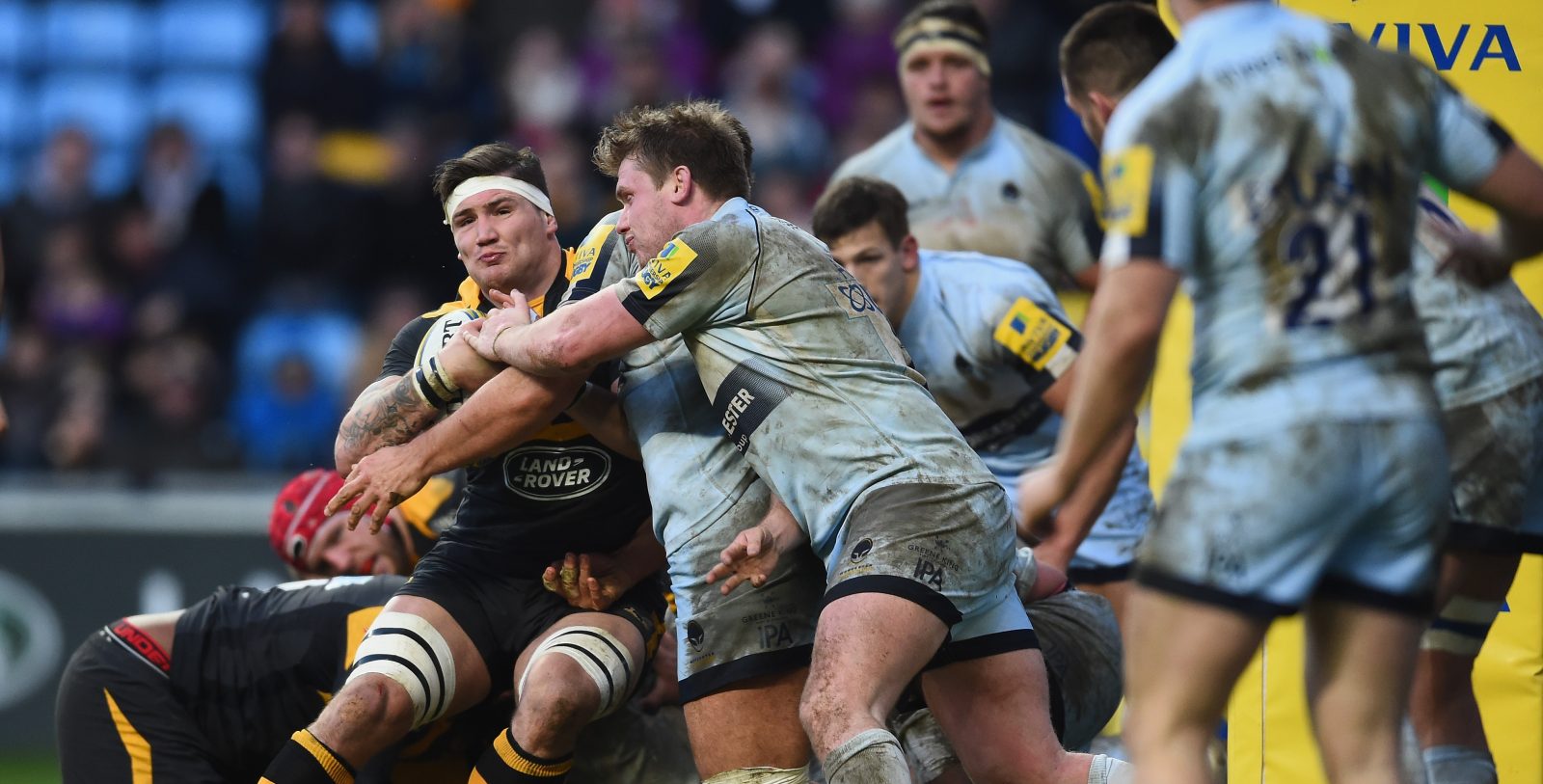 It was heartbreak for Warriors at the Ricoh Arena after a late comeback from Wasps denied Dean Ryan’s men victory in the first ever West Midlands derby.

A mature performance from the visitors had seen Warriors holding a 22-13 lead thanks to six successful kicks from Andy Symons and an interception try for Cooper Vuna.

Guy Thompson’s try underneath the posts gave Wasps a fighting chance with 12 minutes left and despite repelling Wasps to protect their two-point lead, Frank Halai raced down the left to dive over and put the hosts ahead with just two minutes to go.

In a frantic last play of the game, Warriors searched for a score but Wasps pounced on a loose ball as Ashley Johnson punted downfield for Sailosi Tagicakibau to collect and run under the posts, sending Dean Ryan’s men home empty-handed.

Director of Rugby Ryan made four changes to the side which claimed a bonus point against Harlequins as Tom Biggs, Symons, Charlie Mulchrone and Sam Betty all came into the starting line-up.

Warriors had travelled to the Ricoh Arena for the first time in their history and it was a shaky start for the visitors as Ryan Mills saw an early kick charged down in his own 22.

Wasps were applying all the early pressure and Warriors were dealt a blow when Betty was forced to leave the field in the opening five minutes.

The hosts looked to base their attacks around scrum-half Joe Simpson in the early exchanges and the England international soon made a break for the line before seeing his offload spin out of play with winger Halai in support.

Warriors soaked up the pressure and eventually started to feel more comfortable as Mills’ clever kicking gave the visitors some good field position.

And following Warriors’ first real attack of the game, they took an early lead as Symons bisected the posts with a penalty.

The hosts were still enjoying the majority of the possession but could not find a way to penetrate the resilient Warriors defence.

And there were scenes of cheering from the Warriors supporters when Ryan’s men forced a penalty on their own tryline as Wasps looked certain to get the first try of the game.

Mulchrone looked assured on his first ever Aviva Premiership start and Warriors were soon looking threatening at the other end as Biggs chased a loose ball down the wing before Wasps finally recovered.

But that was Biggs’ final action of the match as he was forced to leave the field with an injury.

Ben Howard replaced the winger as Warriors began to gain the ascendency and force their opponents onto the backfoot.

Warriors were frustrating Dai Young’s side as they looked to leapfrog them in the Aviva Premiership table and the visitors doubled their lead after 26 minutes as Symons added his second penalty of the afternoon.

Suddenly Wasps found themselves lacking in ideas and Warriors searched for a way to take advantage as half-time approached.

And they did just that as Vuna intercepted the ball on the left and raced down the wing to touch down.

Symons’ conversion gave the Sixways side a 13-0 lead and all the momentum as they illustrated their attacking prowess against their West Midlands rivals.

Wasps came back powerfully as they looked for a score before the break and they looked to have had it as Jimmy Gopperth rolled across the whitewash following a sustained spell of pressure.

But Gopperth had dropped the ball as he crossed the line after fantastic work from the Warriors defence and Wasps were denied their opening try of the afternoon.

Warriors did not escape the attack unpunished, however, as a Matt Cox infringement in the build-up resulted in a yellow card for the flanker and a penalty to Wasps, which Gopperth converted to put his side on the board.

With Warriors leading 13-3 at the break, Wasps would have to take the game to Warriors if they were to turn the game around in the second period.

The hosts were given a boost at the start of the second-half as Gopperth’s second penalty of the afternoon cut the deficit to seven points before Cox returned from the sin-bin.

Wasps had regrouped at the break and looked a completely different side in the second period as they launched a series of attacks.

And when full-back Rob Miller broke through the centre of the pitch, he was able to offload to lock Kearnan Myall, who ran in underneath the posts.

Gopperth’s conversion brought the scores level at 13 apiece as the drama at the Ricoh Arena continued.

Warriors, who had been the Premiership’s fourth highest tryscorers ahead of the weekend’s games, kept on attacking and nudged ahead with their third penalty of the afternoon courtesy of the ever-reliable Symons.

Luke Baldwin, who had come on for his Premiership debut at half-time, picked-up where Mulchrone left off by getting the backline moving forward.

And it was Warriors who looked the most likely to get a second try as they camped inside the Wasps 22 midway through the second-half.

But Wasps survived as Mills saw a drop-goal effort crash against the upright before the hosts cleared their lines.

Symons had been in sensational form with the boot during the afternoon and struck his fourth penalty of the day with 18 minutes remaining to give Warriors a 19-13 advantage.

Again the visitors pressed and they were almost rewarded with a second try after a neat move down the left.

Wynand Olivier broke forward, before finding Vuna on the touchiline, who offloaded to Pennell on the inside.

With a defender in his way, Pennell looked to play in Niall Annett, but the hooker could not get to the pass in time as Wasps went unpunished.

But Warriors kept the scoreboard ticking over as Symons added a fifth penalty to give his side a nine-point lead at 22-13.

Wasps were in desperate need of a try if they were to keep their hopes of victory alive and they pressed forward after kicking a penalty into touch.

The hosts went through phase after phase on the Warriors tryline and eventually forced their way over as replacement Thompson grounded underneath the posts.

The match swung in Wasps’ favour as they looked for a dramatic winner in the closing stages and Elliot Daly almost gave his side the lead with a long-range penalty from just inside the Warriors half, which dropped just short.

The visitors worked tirelessly to repel their opponents with time running out on the clock but Wasps continued to drive forward and ask serious questions.

And the Warriors supporters were stunned into silence with two minutes of the match remaining as Halai raced down the left and grounded in the corner after good work from the home backline.

Warriors still had a chance to grab a late draw if they could find a chance of a penalty or drop-goal in the final minute.

But after they lost possession on the halfway line, Johnson kicked the loose ball up field for winger Tagicakibau who touched down under the sticks to deny Ryan’s men a losing bonus point.