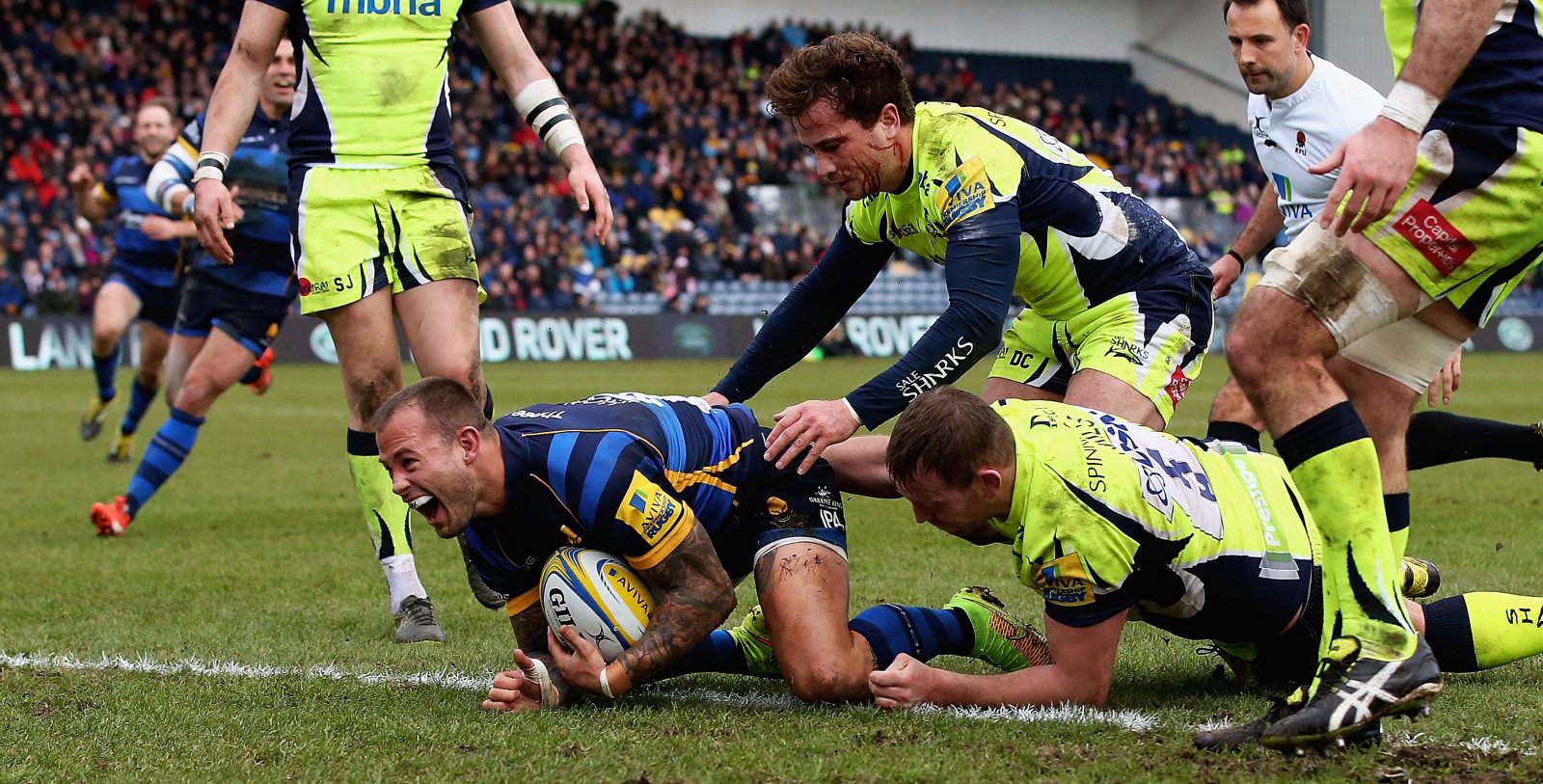 Warriors secured their third Aviva Premiership win of the season and moved to tenth in the table after a sensational performance against Sale Sharks.

South Africa international Francois Hougaard, who enjoyed a fine debut, leapt over for the hosts’ second try of the match after grabbing the ball from the back of a maul and touching down.

The first-half was virtually one-way traffic in Warriors’ favour but Sale reduced the deficit through a David Seymour try just before the break.

Tommy Taylor’s try after the interval put pressure on Warriors but they responded three minutes later through Chris Pennell’s score.

Heathcote added his fourth penalty to give Dean Ryan’s men an 18-point cushion before two Mike Haley tries towards the end set-up a tense finish.

But with a minute left on the clock, Danny Cipriani missed a conversion which would have handed the visitors a losing bonus point before Warriors cleared to touch to claim victory to the delight of the Sixways crowd.

Warriors started strongly as they burst forward with ball in hand before Heathcote kicked a penalty into touch inside the Sale 22.

Warriors won another penalty after claiming possession from the subsequent lineout and the hosts went ahead as Heathcote split the posts with his kick.

Worcester were completely dominating the early stages as Pennell exploited a gap in the away defence as he started a mesmerising attack.

Warriors went through the phases as they looked for a way to the tryline before kicking another penalty into touch.

The hosts increased the pressure on the visitors as Bryce Heem went close, before captain GJ van Velze teed-up Kirwan, who finished from close range to put Warriors eight points to the good.

Sale looked to get into the game and got off the mark after 16 minutes, courtesy of a Cipriani penalty.

And Warriors were dealt a blow after referee Greg Garner ruled out a sensational length-of-the-field try.

Wynand Olivier had finished off a move down the right after good work from Heem and Heathcote but play was brought back due to a hand in the scrum at the beginning of the move.

Sale kicked the penalty into touch before they started to get some momentum as they continued to kick into the Warriors 22.

But Warriors repelled the visitors’ efforts before working the ball to the other end of the field and kicking yet another penalty into touch.

Warriors secured the lineout and looked to drive their way to the line, before the quick-thinking Hougaard took matters into his own hands by taking the ball from the back of the maul and racing over the tryline to get the hosts’ second try of the match.

Heathcote’s excellent conversion gave Warriors a 12-point advantage at 15-3 as the hosts enjoyed a fine first-half in front of the Sixways fans.

And Heathcote added another three points five minutes before the break as the hosts looked to put distance between them and their opponents.

Sale did find a way back into the game as the visiting forward pack drove their way over the line before Seymour grounded to cut the deficit.

But Warriors had the last say of the first period as Heathcote struck another three points with the last kick of the half to give the hosts a 21-8 advantage.

The free-flowing rugby continued after the interval but it was Sale who went over for the first score as hooker Taylor found himself at the bottom of another driving maul to touch down.

But no sooner had Sale cut the gap that Warriors were over for another try as Pennell finished a well-work attack in the corner.

Jaba Bregvadze and Heem had done well in the Sale 22 before Ryan Mills offloaded to Pennell, who strolled in to touch down, before Heathcote converted.

And Warriors’ afternoon continued to get better as Heathcote added his fourth penalty of the afternoon as the hosts swept to an 18-point lead.

Sale refused to give up and continued to push forward as full-back Haley went over in the corner following a sustained spell of pressure, but Cipriani was again off-target with his conversion.

The momentum was shifting in the favour of Steve Diamond’s men as they searched for at least a bonus point before Nick Schonert was sent to the sin-bin.

Warriors were penalised with a series of penalties against them as Sale camped metres from the home tryline looking to make the most of their one-man advantage.

But Warriors forced a Sale knock-on and were rewarded with the put-in at the scrum as the final ten minutes ticked away slowly.

The hosts looked to alleviate the pressure as they cleared to touch but Sale continued to press forward and stole in for their fourth try of the match as Haley went over for his second.

Cipriani missed the conversion and, with it, his side’s chance of a losing bonus point before the hosts kicked a penalty into touch to end the game.