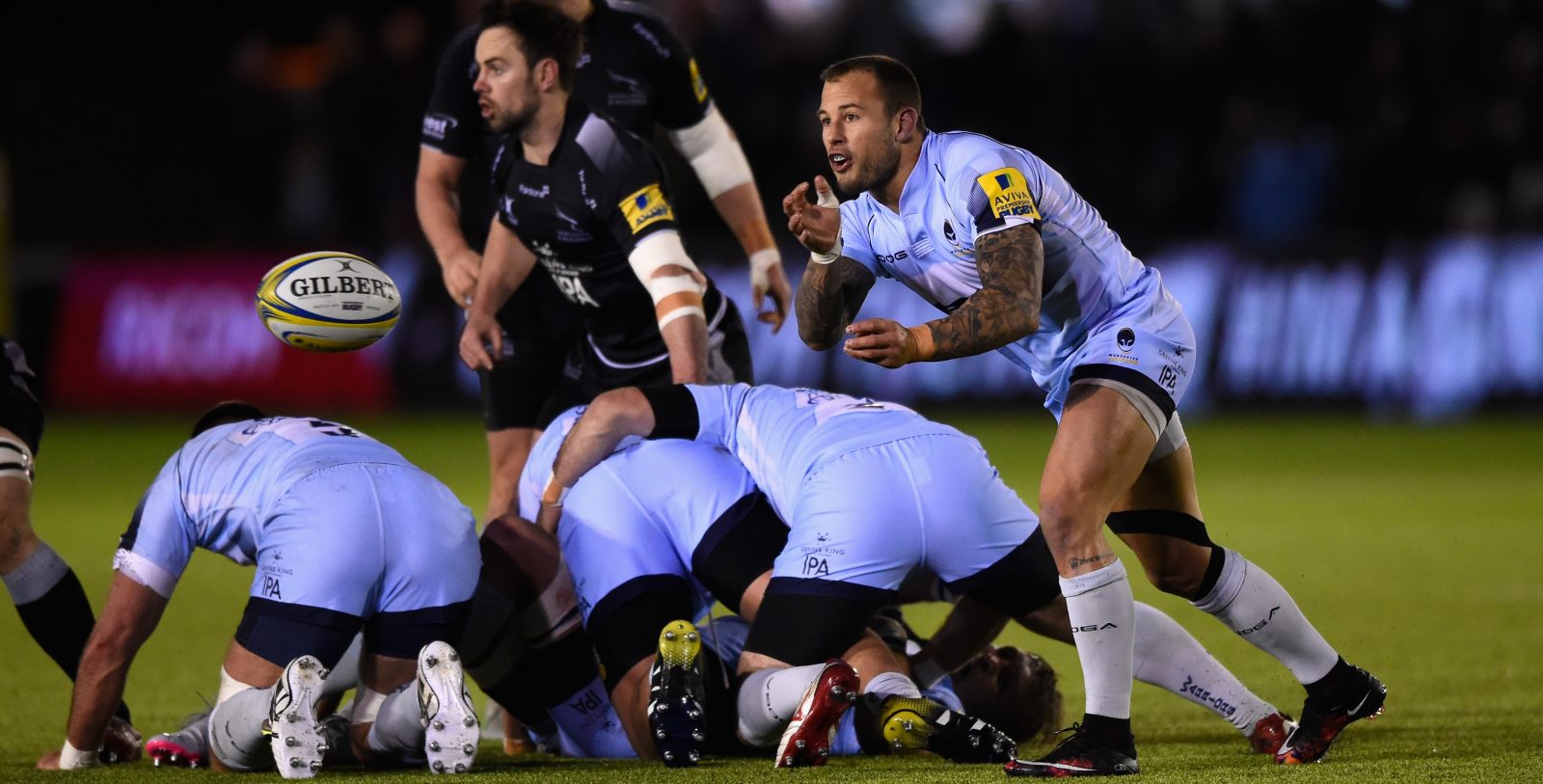 Warriors claimed a valuable away win after a workmanlike performance to move ahead of Newcastle Falcons and up to tenth in the Aviva Premiership.

On a bitterly cold night at Kingston Park Warriors were made to work hard for their win as Newcastle refused to go down without a fight.

Warriors had secured a 7-6 half-time lead thanks to a Dewald Potgeiter try and Tom Heathcote conversion moments before the interval following Andy Goode’s two penalties.

The visitors dominated the second period and nudged further ahead through Heathcote’s penalty before Goode kicked his third of the night to make it a one-point game.

Both sides pushed for a winner and Bryce Heem raced away to score for Warriors as the visitors went 15-9 to the good.

Rob Vickers set-up a nervy finale with Newcastle’s only try of the game but Warriors hung on to claim the win.

After an impressive performance at Franklin’s Gardens last time out Warriors Director of Rugby Dean Ryan made just one change to the starting line-up as Phil Dowson returned to the back row.

Newcastle looked to get ball in hand from the off and former Warriors fly-half Andy Goode took a leading role as he thrashed the ball from side to side before knocking on to gift the visitors a scrum.

Warriors withstood an early onslaught from Newcastle and were finally able to launch their first attack of the game in the tenth minute as they moved the ball across the backline.

But the hosts forced a penalty and Goode kicked into touch 25 metres from the Warriors tryline as the visitors realised any indiscipline would be punished with a loss of territory.

And it was that man Goode who opened the scoring with a well-taken penalty after 15 minutes.

Warriors pushed forward in search of an immediate response as Cooper Vuna raced towards a grubber kick from Francois Hougaard.

Vuna got his foot to the ball as he nudged it over the tryline but the ball had too much pace on it and it drifted out of play as Newcastle survived the scare.

Goode saw a second penalty attempt drop wide just after the halfway stage of the first-half but the hosts were enjoying the majority of possession on a windy night at Kingston Park.

Warriors were struggling to make any headway and Goode doubled his side’s advantage just after the half-hour mark as his penalty smashed against both posts before dropping over.

The visitors came back into the game and should have got off the mark through a Heathcote penalty in front of the posts, but the Scotland international thrashed his kick wide.

His miss was soon forgotten, however, as Warriors kicked another penalty into touch and eventually went over for the first try of the night as Potgeiter grounded following a driving maul.

Heathcote converted to ensure Warriors entered the interval with a 7-6 lead despite spending large spells of the first period defending.

Warriors had the wind at their backs after the break and looked far more dominant as they moved the ball forward quickly.

The visitors kicked a penalty into the Newcastle 22 and piled on the pressure as they looked to steal in for a second try of the night.

Warriors camped on the home tryline and Hougaard looked to have found a gap and dotted down, only for the referee Wayne Barnes to rule it out after consultation with the TMO.

But Warriors had the advantage and Heathcote added another three points with the subsequent penalty to give his side a 10-6 lead.

The game was a close affair and Goode kept the scoreboard ticking over with his third penalty after 54 minutes as the hosts failed to find any attacking sparkle with ball in hand.

Vuna showed electric pace down the left before the hour-mark but the free-flowing rugby was few and far between with the magnitude of the occasion taking its toll.

Warriors continued to pile forward and they searched for a way through moments later as they went through phase after phase in the Newcastle 22.

And the visitors did eventually find a second try as Heem raced down the right before diving over the line as Warriors increased their lead to 15-9 inside the final quarter.

The try only acted to finally spur Newcastle into life and the momentum shifted in the hosts’ favour as they battered their way forward.

Ryan’s men were being forced to defend and they made tackle after tackle as they looked to prevent a home try.

Newcastle kicked a penalty into touch and drove forward before captain GJ van Velze was sent to the sin-bin eight minutes before the end after an infringement on the tryline.

And with a one-man advantage the hosts drove their way over courtesy of prop Rob Vickers after Barnes had again spoken to the TMO.

Crucially Craig Willis missed the conversion as Warriors kept their lead, albeit only by a solitary point.

Warriors were now looking to run the clock down and kicked into touch after Marcus Watson was sin-binned following a deliberate knock-on.

The hosts pushed forward as the clock ticked past 80 minutes but they knocked on in the final play of the game as Warriors came out on top, much to the delight of the travelling supporters.