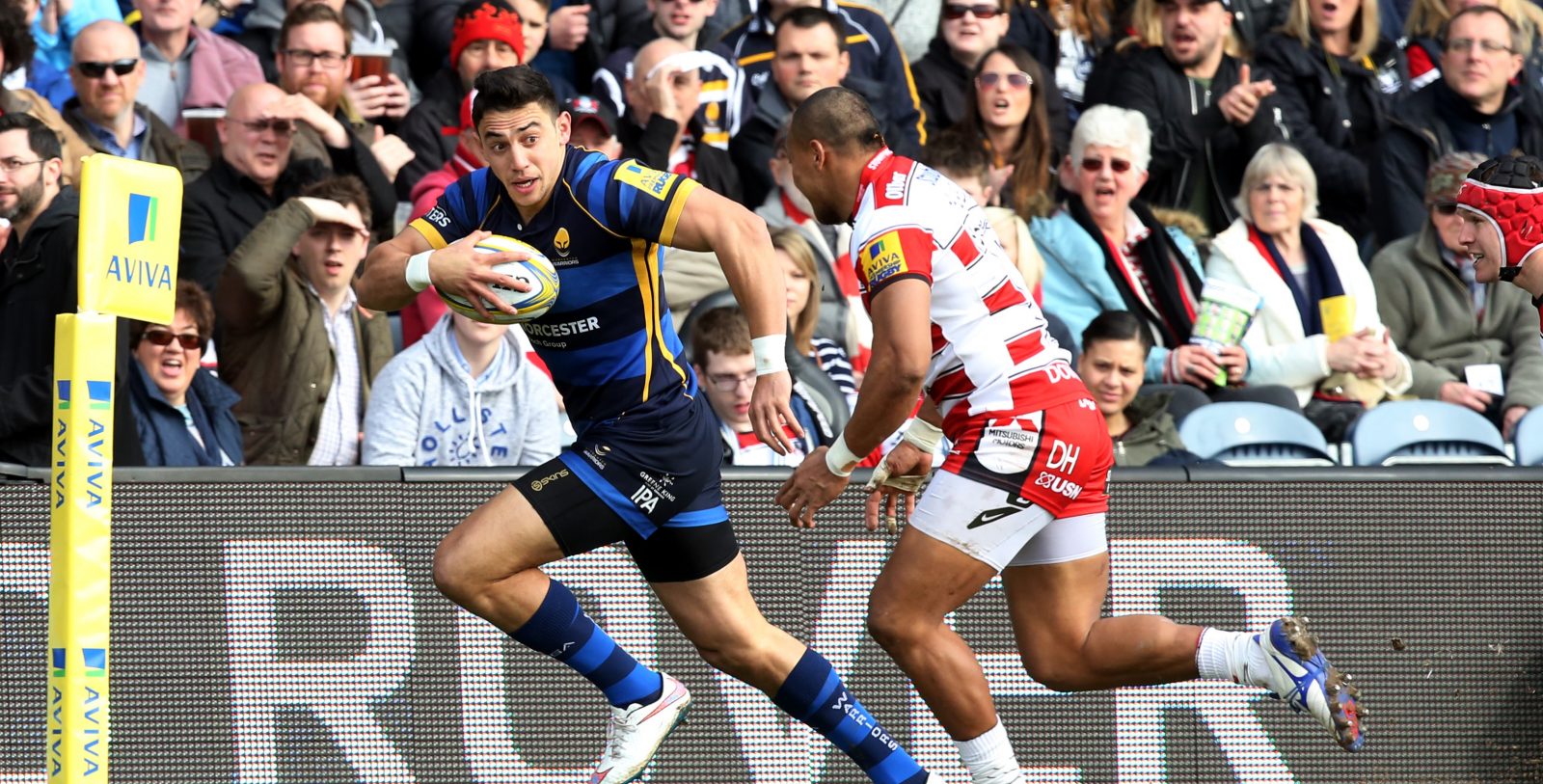 Warriors secured Derby Day bragging rights as they fought off a Gloucester comeback to claim an important 28-20 victory at Sixways.

The hosts produced a dominant performance after taking the lead through Bryce Heem’s early try against their M5 rivals.

Bill Meakes dotted down following a clever grubber kick from Callum Braley before Heem went over for a second to put Warriors 15-10 ahead at the break.

Warriors extended their advantage in the second period as Niall Annett drove over to put the home side 22-10 ahead.

Gloucester briefly rallied and James Hook converted his own try as a comeback looked on the cards.

But Heathcote’s third penalty of the afternoon, combined with a spell of determined defending gave Warriors their fifth win of the season.

The dry weather made it a perfect afternoon for running rugby and Warriors quickly got ball in hand and moved around the pitch.

Francois Hougaard looked to sweep up possession after a flat kick from Hook before Wynand Olivier raced down the left.

And Warriors soon had the opening try of the afternoon after an exquisite move from the home backline.

The ball was moved over to the right before Ryan Mills launched a huge up-and-under to put the Gloucester defence under pressure.

And after the bounce favoured the hosts, Heem claimed the ball and raced down the right before grounding underneath the posts.

Tom Heathcote added the conversion as Warriors cruised to a 7-0 lead inside the opening three minutes.

Gloucester found their rhythm and had the opportunity to get off the mark moments later as Hook lined-up a penalty. But his effort dropped wide.

The visitors continued to press and Hook kicked a second penalty into touch, only to see the powerful Warriors forward pack win the ball and clear the danger.

But it was Gloucester who were enjoying much of the possession and they searched for a way through at every opportunity.

And the visitors finally got off the mark just before the halfway stage of the first-half as Meakes latched onto Braley’s kick before dotting down.

Hook’s conversion brought the scores level at 7-7 as the Sixways supporters were treated to an end-to-end spectacle.

Both sides continued to attack as Heathcote and Hook exchanged penalties just before the half-hour mark.

And Heathcote almost put Warriors back in front when his 40-metre penalty smashed back off the upright.

The hosts were enjoying the upper hand as the first-half entered its latter stages and they launched an assault
on the tryline following a yellow card for Ross Moriarty.

And after a flowing move across the backline, Heem was again on hand to dot down in the corner.

That gave Warriors a 15-10 lead at the break after an entertaining first-half of rugby.

Warriors were intent on building on their lead in the second period and raced forward down both flanks.

And after a sustained period of possession, Warriors had their third try of the afternoon courtesy of Annett.

The hosts camped on the tryline as Hougaard looked to dummy his way to the line before Annett did eventually touch down thanks to the combined efforts of the forward pack.

Dean Ryan’s men were dominating proceedings at Sixways and pinned Gloucester back in their own half for long spells with a mixture of tough tackling and creative attacking plays.

Heathcote put Warriors 12 points ahead with his second penalty of the afternoon just after the hour-mark to put his side out of sight.

Gloucester refused to roll over and grabbed their second try of the afternoon with just under 15 minutes remaining as Hook took the initiative following a spell of pressure and exploited a gap to touch down.

The Wales international converted his own score as Gloucester reduced their deficit to five points.

Warriors needed to protect their lead, run the clock down and manage the threat of a Gloucester comeback.

And when Heathcote added his third penalty to put Warriors 28-20 ahead there was no way back for Gloucester as they were denied even a losing bonus point.