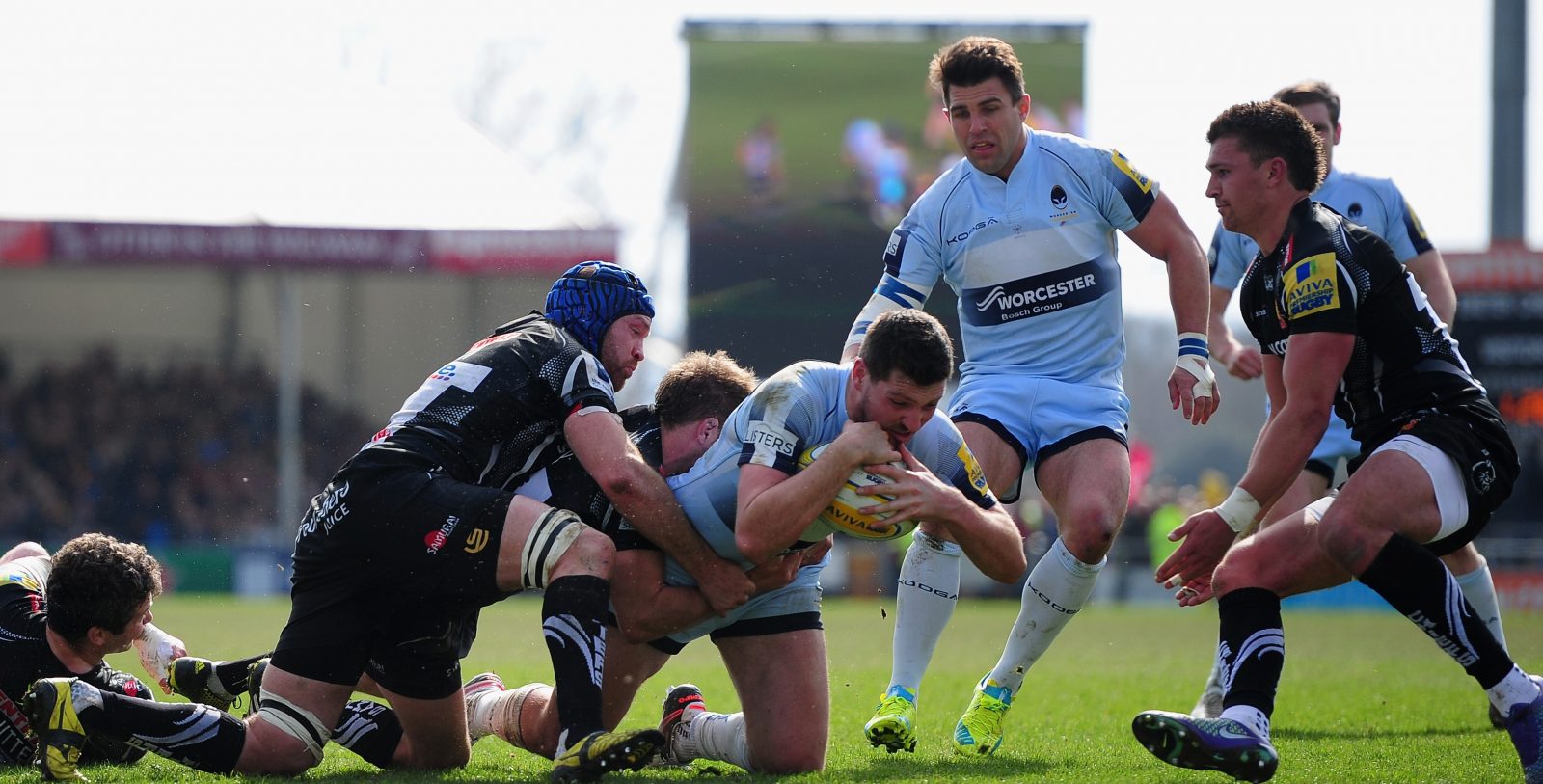 Exeter Chiefs produced a rugby masterpiece at Sandy Park as Warriors were subjected to their heaviest defeat of the season.

Warriors had started well before Exeter piled on the pressure and went over for three tries in the space of five minutes as Thomas Waldrom, James Short and Olly Woodburn touched down to put the hosts 17-0 ahead after 25 minutes.

Dean Ryan’s men flourished before the break and cut the half-time deficit to just five points as Cooper Vuna and Andy Symons both touched down.

But Exeter turned it on in the second period as Ollie Atkins grounded before the floodgates opened for the hosts.

Waldrom piled over for his second before Woodburn did the same as he raced through the Warriors defence.

There was no let-up as Exeter continued to attack and Waldrom and Woodburn both went over to complete hat-tricks as the hosts showed why they are such a threat for the Aviva Premiership title.

It was a tough afternoon for Warriors, who were reduced to 14 men on three separate occasions.

Warriors made three changes to the side which defeated London Irish last time out as James Johnston made his first start for the Club, while Sam Betty and Andy Symons both returned to the line-up.

With Exeter aiming to record their first-ever Aviva Premiership top-four finish, the visitors could have been forgiven for expecting a tough afternoon at Sandy Park.

Ryan’s side enjoyed the stronger start as they pinned Exeter back on their own tryline for the opening five minutes.

Warriors searched for an opening try during a sustained spell of pressure but Exeter defended well and eventually cleared upfield.

Exeter then had their opportunity to put the pressure on and a potent backline, which included the likes of England duo Jack Nowell and Henry Slade, soon looked to get ball in hand.

Gareth Steenson kicked a penalty into touch five metres out before the home forward pack got to work.

Exeter forced a string of penalties as Johnston was yellow-carded before the crowd put pressure on the referee Thomas Foley to award a penalty try.

The hosts thought they had gone over in the corner after play was switched to the right. Foley went to the TMO but Damian Welch’s effort was not given as a try.

Still the hosts pressed as Warriors struggled to gain any really possession and, after scrum after scrum, Exeter finally went ahead as Waldrom barged his way to the tryline at the halfway stage of the first-half.

The hosts were enjoying all the possession on home turf and doubled their advantage three minutes later as Short finished off a fine move down the left.

The winger, who had been brilliant for Exeter when they visited Sixways in January, had come on as a replacement and was causing the Warriors defence all sorts of problems.

Steenson converted before Exeter grabbed their third try in the space of five minutes as Woodburn latched onto a clever kick from Nowell to dot down in the corner to give Exeter a 17-point advantage.

The visitors had barely got going and had given themselves the unenviable task of trying to get back into the game against a team with a formidable home record.

But Warriors were given hope six minutes before the break as Vuna got on the end of a well-worked attack to somehow touch down despite having three Exeter defenders looking to halt him.

And the try spurred Ryan’s men into life as they finished the opening period strongly, forcing a five-metre scrum after Nowell had been forced to ground behind his own tryline.

Warriors won the ball from the scrum and went over for their second try of the afternoon as Symons found space in the home defence as he stormed to the line.

Heathcote converted as Warriors reduced Exeter’s lead to five points at 17-12 as the referee brought the half to an end.

Warriors looked to regroup at the break but were dealt a huge blow in the opening stages of the second period as Atkins forced his way over the line before Steenson converted.

The bonus-point try and kick put Exeter 12 points ahead at 24-12 as Warriors faced another uphill battle to turn the game around.

And the visitors’ afternoon took another turn for the worse when Jaba Bregvadze was sin-binned moments after coming onto the field.

Warriors refused to go down without a fight and they continued to battle, restricting Exeter to half chances before the Georgian hooker returned to the field.

But Exeter just had too much for the Sixways side as Waldrom again steamrolled his way to the line just before the hour-mark.

And Exeter put the game to bed as Woodburn raced through the middle and dotted down beneath the posts before Slade converted to give the hosts a 36-12 advantage.

It was all one-way traffic as the match wore on and Waldrom completed his hat-trick in the final ten minutes as the hosts showed how relentless they were.

Carl Kirwan became Warriors’ third player to be sent to the sin-bin in the closing stages as it turned into an afternoon to forget for the men from Worcester.

And a miserable afternoon for Warriors was completed when Woodburn added his third try just before the end.