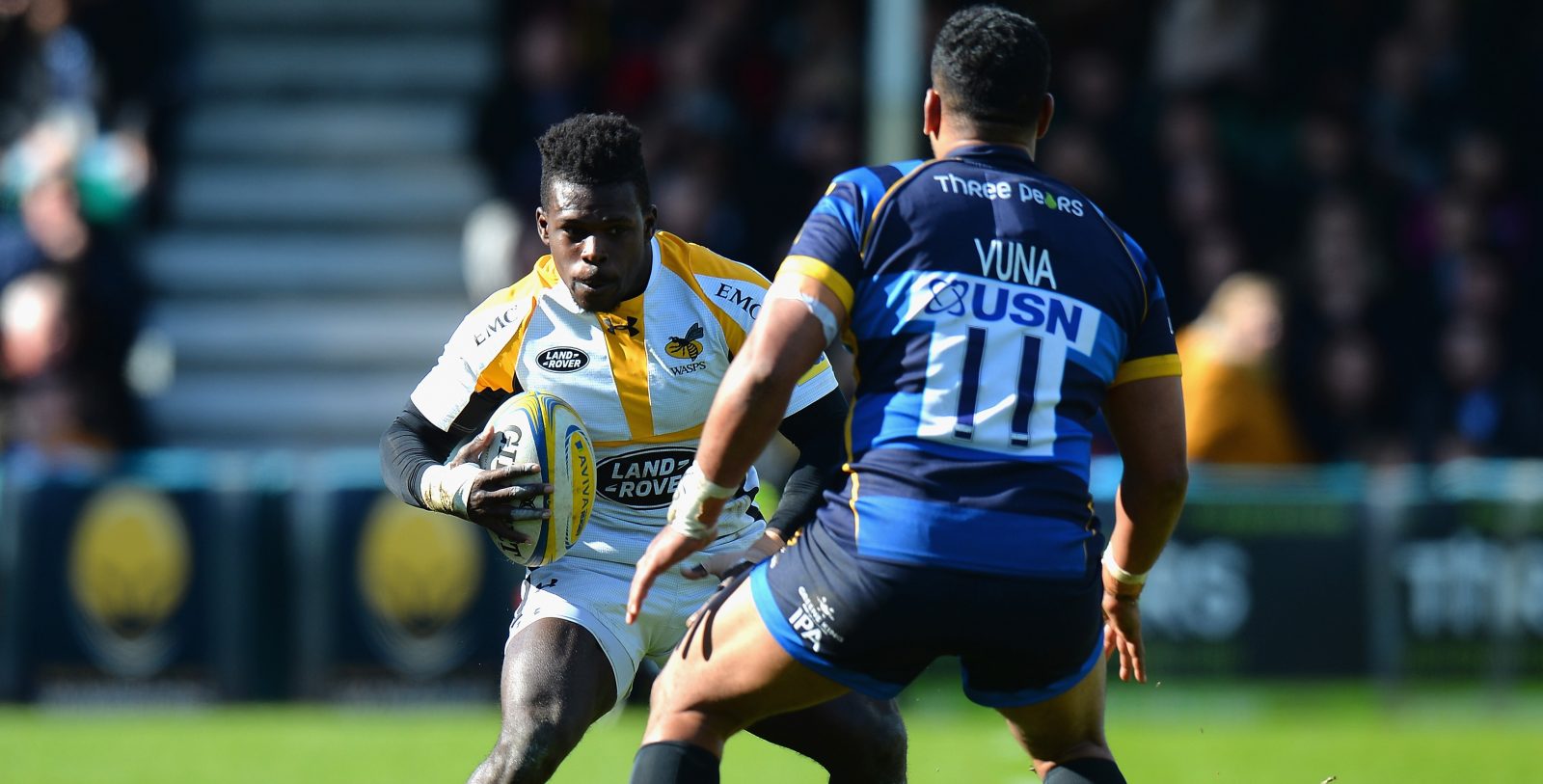 Warriors and Wasps played out a 14-try thriller as the first West Midlands derby at Sixways proved a memorable occasion.

Christian Wade was the star of the show as the England winger raced away for six tries to steal the headlines.

Dai Young’s men stormed to a 14-3 lead as Frank Halai scored the opening try of the afternoon before Wade went over for his first.

Francois Hougaard grabbed Warriors’ first try of the afternoon before Wade went over for a quick-fire double to put the hosts 26-10 ahead after half an hour.

Cooper Vuna touched down before the break but Wade’s fourth try put the visitors 33-15 up at the interval.

Warriors battled in the second-half and refused to let the game get away from them as Andy Symons grounded following his introduction at half-time.

But Wade scored his fifth and sixth tries to put the visitors out of sight at 47-20.

Warriors looked to fightback when GJ van Velze went over to secure a try bonus point, before Bryce Heem’s score gave the hosts a fighting chance.

But Alex Lozowski condemned Warriors to defeat with Wasps’ eighth try of the afternoon.

Carl Kirwan had the final say for Warriors but it was Wasps who went home with the West Midlands bragging rights.

Warriors came out strongly and took an early lead as Ryan Mills launched an accurate penalty from the halfway line.

But Wasps soon went over for the first try of the afternoon after Warriors had conceded possession from a lineout inside their own 22.

The visitors battled to the line as they put the home defence under pressure.

And scrum-half Dan Robson launched the ball out to the left, allowing Halai to twist his way over the line. Elliot Daly converted from the touchline before the match started to really open up.

Warriors were looking to exploit any gaps in in the Wasps defence and Mills’ clever kick in behind put the visitors under the cosh for a spell.

But Wasps soon illustrated their attacking ability once again as Rob Miller broke through the home defence before offloading to Robson.

And as Robson closed down on the Warriors tryline, he teed-up Wade, who raced through to dot down.

Ruaridh Jackson, who came into the side as a late replacement for Jimmy Gopperth, added the extras this time as Dai Young’s men raced to a 14-3 lead.

There was an end of season feel to the match as both sides looked to play running rugby and move the ball into space.

And Warriors went over for their first try midway through the first-half as the hosts camped on the tryline before the quick-thinking Hougaard took the initiative and raced through the gap to ground.

Heathcote converted to put Warriors within four points of their West Midlands rivals at 14-10 down.

But Wasps were relentless and continued to drive forward at every opportunity.

And Wade soon went over for his second and Wasps’ third try of the afternoon as he found himself on the end of another attacking move.

Wasps were starting to dominate the game and prevented Warriors from enjoying any real possession as the half wore on.

The visitors looked like scoring every time they went forward and Wade went over for his hat-trick on the half-hour mark as his kick and chase forward bounced straight back into his hands to allow him to race down the right and dive over.

That handed Wasps a try bonus point with 50 minutes still to play as the game was in danger of becoming a one-way affair.

But Warriors had other ideas and knew they had to come out and attack if they were to have any chance of undoing the damage caused.

And Chris Pennell soon teed-up Vuna, who dived between two defender to score in the corner as Warriors ensured the match remained a contest.

But Warriors just couldn’t seem to defend against a potent Wasps backline and Wade remarkably went over for his fourth try of the afternoon minutes before half-time as he raced onto a grubber kick to dot down on the left.

Daly’s conversion put Wasps 33-15 ahead as Warriors went into the break with a huge dilemma of how to stop Wade and Wasps inflicting even more damage in the second period.

Warriors looked much sharper at the beginning of the second-half and kept their hopes alive as Symons burrowed his way through a gap and grounded.

But Wasps again extended their lead as Wade went over for his fifth try of the game as he intercepted a loose pass from Mills and raced through unopposed.

Jackson converted to put Wasps 40-20 ahead as the afternoon went from bad to worse for the hosts.

The floodgates had opened early in the first-half and they showed no signs of closing as Wasps again made the most of an interception as Halai stole the ball metres from his own tryline before racing down the right.

Halai put in Wade, who cruised to the line for his sixth try and Wasps’ seventh.

Wade had stolen the show at Sixways with a fine individual performance and offered a stark reminder of his talents when given space.

Jackson’s conversion put Wasps 47-20 ahead as they looked to cement their place in the Aviva Premiership play-offs.

But Warriors at least had a good day on the attack and they, too, secured a try bonus point just before the hour mark as captain Van Velze grounded in the corner following a miss-pass from Heathcote.

Dean Ryan’s men refused to give up and continued to attack in the hope of staging the most unlikely of comebacks.

And when Heem got on the end of another Warriors attack to dot down in the corner, the hosts cut their deficit to 17 points with just over ten minutes remaining.

But any hopes of a comeback were well and truly ended when replacement Lozowski stole in to score before converting to put Wasps 54-30 ahead.

Kirwan went over for Warriors’ sixth try moments before the end but the day belonged to Wasps as they moved a step closer to securing a home Premiership semi-final.