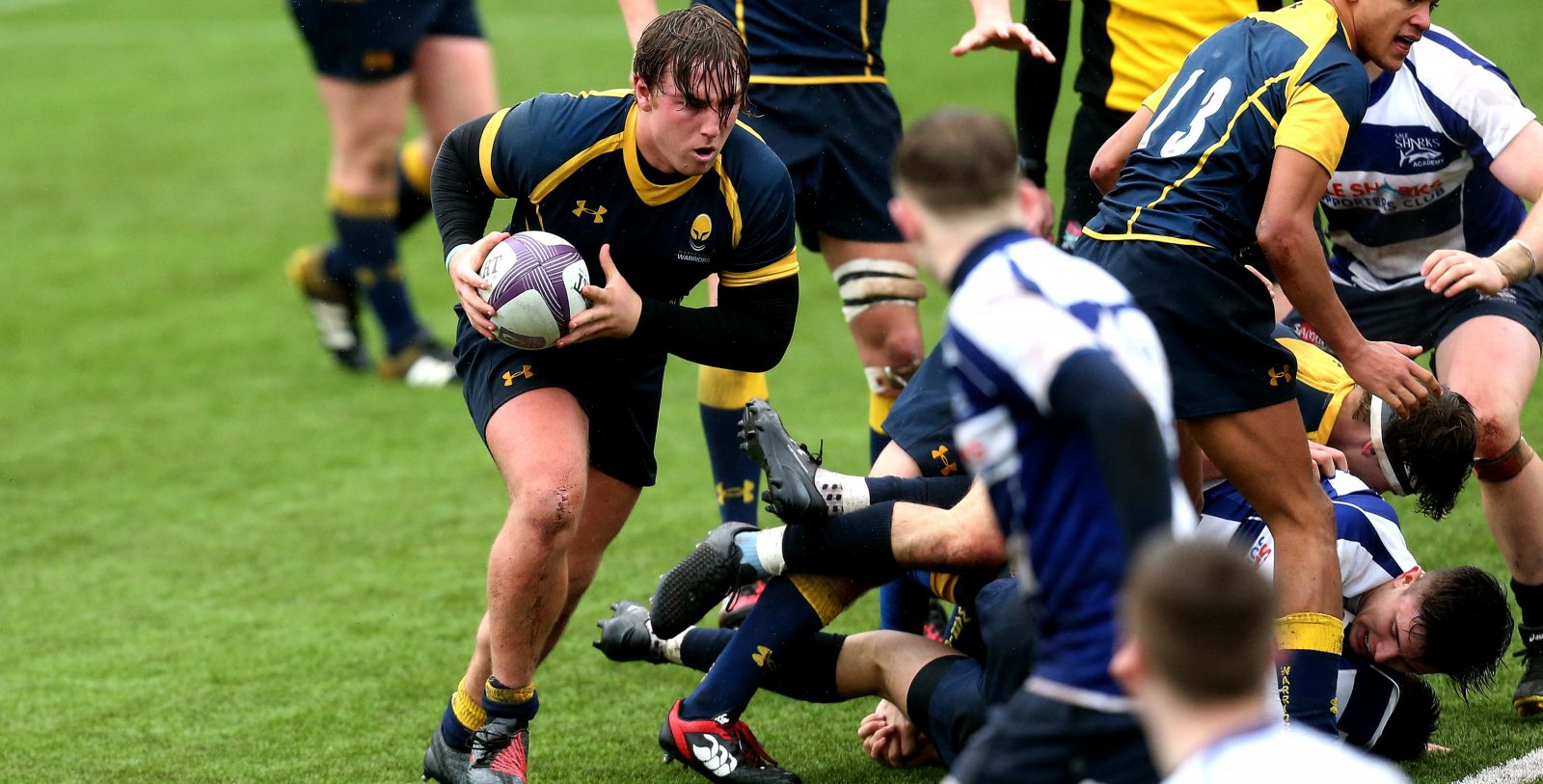 Worcester Warriors Under 18s’ winning run came to an end as a clinical Sale Sharks won 27-0 at a rainy Sixways on Sunday in the Premiership Rugby Under 18 Academy League.

Sharks’ Kieran Wilkinson scored the game’s opening try before stepping up to convert in what was the only points of the first-half as Warriors uncharacteristically struggled for fluency in possession.

Wilkinson then notched a penalty after the break and was on hand to convert a penalty try as Sale enjoyed a 17-0 lead.

A late yellow card for Sharks’ Nic Dolly may have given the home fans hope of a Warriors comeback but fly-half Wilkinson had other ideas, landing a penalty and making it a 17-point haul when he converted Conor Doherty’s late try as Sale secured a comfortable win.

Warriors were up against it in the opening seconds of the game, with winger Alex Bartley shown a yellow card for a dangerous tackle on Tom Walsh while he was collecting the kick-off.

With the extra man, Sharks were able to control the opening period with consistent possession, and scored the opening try after breaking Warriors' resilience after ten minutes of pressure.

The ball was offloaded to Wilkinson on Warriors' 22, where he was able to glide through a gap in the defence and beat full-back Jake Leonard to score the try, which he stepped up to convert.

Following the first score, Bartley returned to the action and Warriors started moving the ball more efficiently, but Sharks pressed the home team into rushed passes and forced mistakes in good scoring positions.

Warriors were also made to defend dangerous attacks, with Dion King spotting a dangerous run early to tackle Arron Reed into touch as he broke down the left.

The home team would then be required to defend on their own tryline, and great discipline allowed Warriors to nullify the danger and go into the second period with only one try scored against them.

But Sharks were able to start the second-half where they left off in the first, constantly disrupting any possible Warriors attacks before they could really get started.

The away team were able to consistently get to the breakdown quicker and gain penalties from Warriors' possession with their physical approach.

And it was from a penalty that Sharks extended their lead, with Wilkinson kicking through the posts from just inside Warriors' half.

Set-pieces, that had been very effective for Warriors in attack, were struggling to make as great an impact with mauls and scrums not as dominant as they had been in recent matches.

Sharks then mauled their way forward after winning a penalty in the Warriors half, and after consistent infringements from the hosts, the referee went under the posts to award a penalty try and Wilkinson added the extras.

Wilkinson was using his boot often throughout open play as well, kicking for territory and always pushing Warriors onto the back foot.

Sale’s Dolly was then sin-binned with ten minutes remaining after a high tackle but it was the visitors who got the next points on the board as Wilkinson fired over another penalty when Warriors were penalised for not releasing.

The visitors completed the scoring and victory in the closing stages with their third try as Doherty stepped inside to score and Wilkinson managed to convert as he took his points tally for the day to 17.

Worcester Warriors Academy Manager Chim Gale admitted his team were second best on the day, but is confident they can return to winning ways at Newcastle Falcons next Saturday 4 February (kick-off 5.30pm).

He said: "Sale turned up with a strong frame of mind and we perhaps lacked the urgency and the energy that we had last week.

"Next week we have an opportunity to play another fixture and will try to put right what we think went wrong."