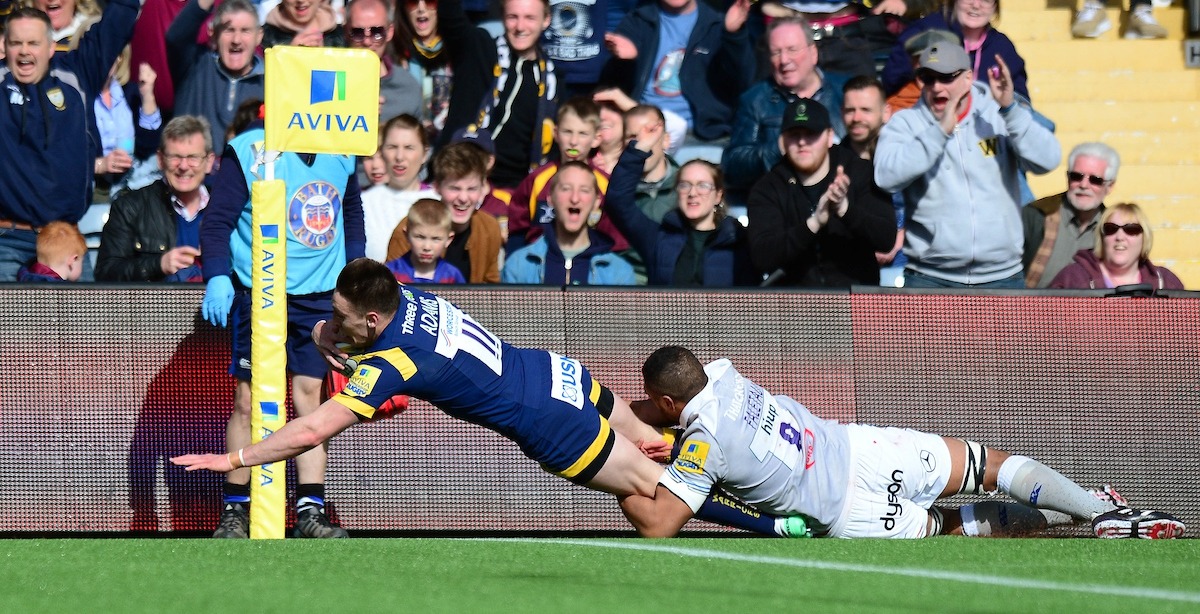 Warriors picked up another crucial four points as they battled to a 25-19 Aviva Premiership victory over Bath Rugby after an end-to-end affair at Sixways.

The first-half was a hugely entertaining contest but chances were limited as defences held firm.

George Ford and Ryan Mills exchanged penalties before Matt Banahan went over for the opening try of the match two minutes before the break.

Mills reduced Warriors’ deficit to 10-6 at the break with a penalty from inside his own half as the nerves jangled around Sixways.

Ford nudged Bath further ahead five minutes into the second-half before the momentum changed as Warriors went on the offensive.

Josh Adams raced down the right to score Warriors’ first try before Wynand Olivier broke through the centre to put the hosts ahead for the first time in the match just before the hour mark.

And Will Spencer put the game out of Bath’s reach as he touched down with five minutes remaining as the hosts racked-up a 25-16 lead.

Ford added a penalty late on but it wasn’t enough for Bath as Warriors moved 12 points clear of the bottom of the Premiership table.

Warriors came storming out the blocks and looked for an early score as they moved the ball around the backline inside the Bath 22.

Perry Humphreys was denied in the corner before Bath defended a five-metre lineout well to prevent themselves going behind.

Warriors were then forced into action at the other end as Bath had their first attack of the game after ten minutes.

With the tryline in sight Ford and Anthony Watson exchanged passes, before Chris Pennell made a last-ditch tackle to prevent Banahan from going over.

The sides continued to go toe-to-toe in the early exchanges and there was no doubting Warriors’ commitment to the cause as Biyi Alo put in a crunching tackle to lay down his side’s intent.

The contest remained scoreless for the opening 23 minutes as the defences held the upper hand but Bath eventually went ahead as Ford bisected the posts with a penalty.

The hosts almost replied immediately as Sam Lewis raced towards the tryline after good work from Pennell and Humphreys. But the Welshman couldn’t quite find a way over the line as he knocked on inches short.

The Warriors forward pack were putting in a huge shift to help their backline gain territory in a half of limited chances.

And when the hosts won a penalty with five minutes of the first-half remaining, Mills was able to take advantage to level the scores at three apiece.

Gary Gold’s men deserved to return to the dressing room level but went behind as Banahan evaded a string of Warriors defenders to dive over in the corner.

Ford added the conversion before Mills had the last say of the half as he kicked a huge penalty from inside his own half as the sides turned around with Bath 10-6 ahead.

Ford nudged Bath further ahead in the early stages of the second period with another well-taken penalty.

But Warriors were well and truly in the contest and continued to knock on the door as they searched for their first try of the afternoon.

And persistence paid off as Warriors cut their deficit to two points after a sensational try from Adams.

Ben Te’o broke through before offloading to Jackson Willison, who teed-up Adams to race down the right and dive over the line.

Warriors had the chance to go ahead when Mills was presented with a penalty from distance. But the fly-half miskicked his attempt as Bath survived.

The hosts were starting to get the upper hand as the momentum switched and Mills heaped further pressure on Bath when he kicked a penalty into touch.

And Warriors soon found themselves ahead as Olivier found a gap in the Bath defence and forced his way over the line.

Mills converted as Warriors suddenly found themselves five points ahead with 20 minutes remaining.

The match was open, yet nervy, and Ford kept the Bath scoreboard ticking over courtesy of his third penalty of the afternoon to reduce Warriors’ lead to two points at 18-16.

But Warriors refused to sit back and defend their lead as they looked for a third try to kill the game off.

And the third try came from former Bath lock Spencer, who used the full force of his body to drive his way over the line from close range.

Ford added three points for Bath late on but it was another good day for Warriors and their former Bath Director of Rugby Gold.