Warriors went down to a 41-10 defeat at the hands of Aviva Premiership champions Exeter Chiefs on Friday night.

The sides traded early penalties before Exeter forward Sam Simmonds bundled his way over for the first try of the night after 24 minutes.

Jack Nowell finished from close range for a second before Chiefs lock Jonny Hill somehow found his way to the line on the stroke of half-time as Exeter swept to a 24-3 lead at the interval.

Warriors searched for a way back into the game after the break as Biyi Alo forced his way over to give his side a fighting chance.

But Exeter ran away with the game late on as Olly Woodburn went over before Simmonds added his second and Exeter’s fifth.

Warriors Director of Rugby Gary Gold made one change to the side which faced Wasps last time out as Alo came in at tighthead for the injured Nick Schonert.

Exeter gained some early territory and went ahead after three minutes as Gareth Steenson struck a penalty from close range.

Warriors were defending well in the early exchanges and soon forced a penalty in their own 22 as Exeter searched for a way to the tryline.

Sam Olver was brought on for the injured Tom Heathcote after just 11 minutes and a kicking battle ensued as the Warriors fly-half looked to put his side into good areas. And Olver levelled the scores just before the halfway point of the first-half with a penalty from just inside the Exeter half.

Exeter thought they had claimed the first try of the night as Woodburn raced onto the end of his own kick forward to slide over the line. But the referee Ian Tempest ruled the try out for a knock on after consulting the TMO.

Woodburn was causing the Warriors defence all sorts of problems whenever he got the ball in space on the left.

But when Exeter did eventually get the first try of the night, it came from giant number eight Simmonds, who crashed over from close range following good work from the forward pack.

The Devon side stepped up through the gears as the first-half wore on. And they had their second try of the night seven minutes before the interval as Nowell finished off a good move after scrum-half Nic White had made a break through the centre.

And the evening continued to go from bad to worse for the hosts as Exeter grabbed their third try of the night on the stroke of half-time as lock Hill raced down the left before rolling his way over the tryline. Steenson converted as the sides turned around with Exeter 24-3 to the good.

Gold’s men looked to make a fight of the game after the break as they put early pressure on the visitors.

Warriors found themselves camped on the Exeter tryline as they were awarded penalty after penalty.

And they were eventually rewarded as giant prop Alo smashed through a melee of Exeter defenders to bundle his way over. Olver converted to cut Exeter’s lead to 14 points at 24-10.

The Chiefs should have had a bonus point fourth moments later as Lachie Turner was teed up metres from the line in space. But the Australia international knocked on with the tryline at his mercy.

But Exeter did get their fourth try midway through the second-half after a clever kicked forward by Ian Whitten was gathered and offloaded to Woodburn, who raced to the line.

And Simmonds put the nail in the coffin with Exeter’s fifth try of the night late on. 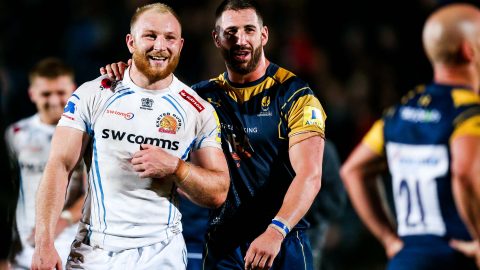