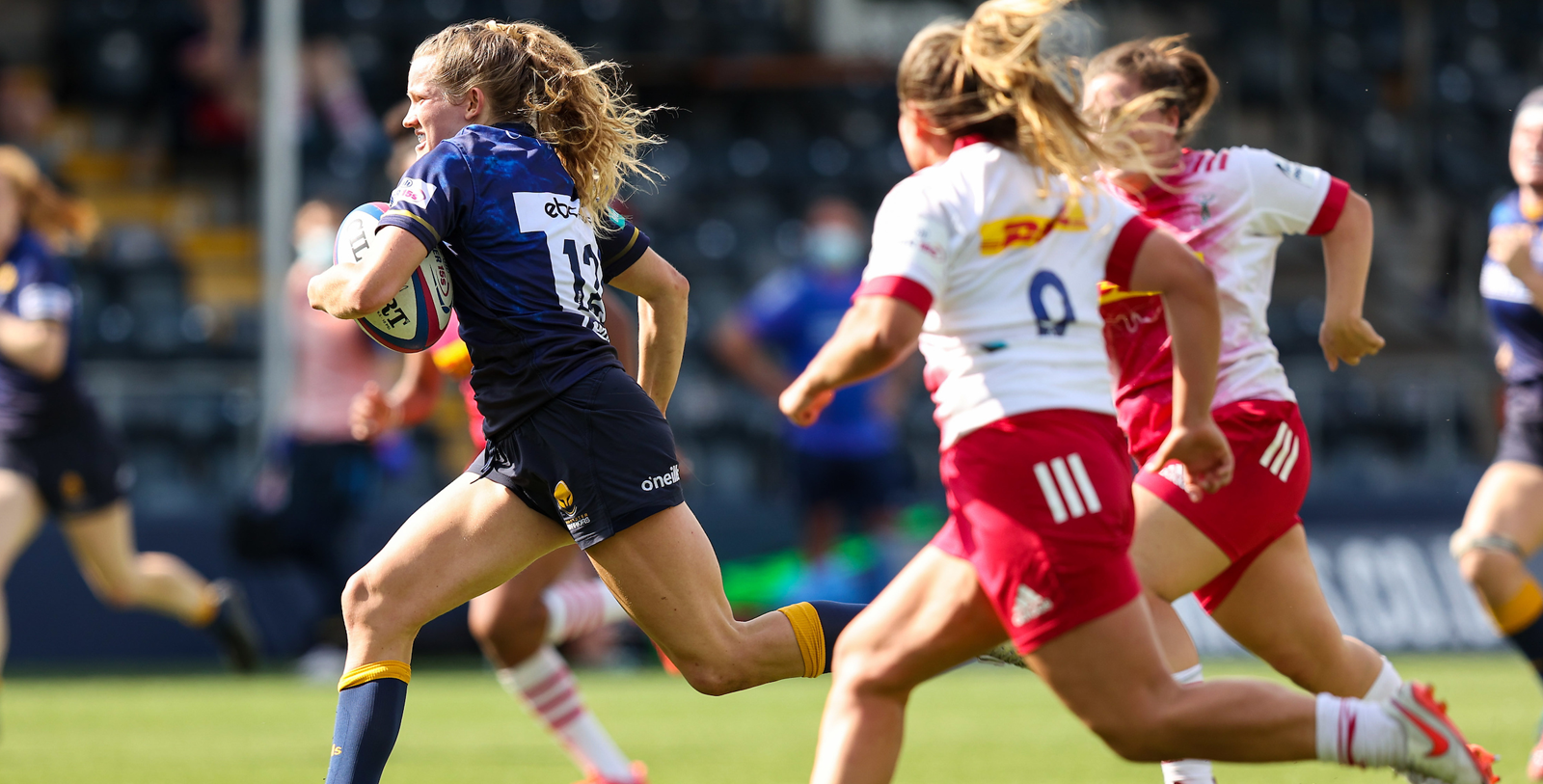 Warriors Women secured a try bonus-point thanks to Jemima Moss, who came off the bench to score her first try for the club during a thrilling Allianz Premier 15s clash at Sixways.

Despite what the score-line suggests, Warriors were impressive in periods of the game and were unfortunate not to go into the break with the lead had Abi Kershaw evaded a covering ankle tap to finish off a 50-metre dash to the line.

Quins were in the ascendancy as early as the seventh minute with a quick-fire double through Heather Cowell and England star Ellie Kildunne, who sealed her hat-trick late in the contest.

Warriors showed tremendous character to hit back with scores from USA second-row Alycia Washington and Carys Phillips who crashed over from close-range to reduce the gap to 14-10 in favour of the visitors.. Washington made it two tries in two games to underline her importance to the team – her experience proving invaluable throughout the match.

On 35 minutes Dainton extended Quins’ advantage, finishing off a sweeping attack involving Ellie Green and centre Lagi Tuima. However, with half-time looming, Warriors chalked up a Try of the Season contender – the impressive Carys Cox doing her England selection hopes no harm as she supported an explosive Cat McNaney break to score under the posts. Vicky Foxwell added the extras, with Quins holding a slender 21-17 lead.

With the last play of the first half, Abi Kershaw went close to giving Warriors the lead for the first time in the contest only to be ankle tapped just short of the line after racing half the length of the field. The Centre of Excellence talent certainly showed the Quins defence a clean pair of heels and gave the away dressing room much to ponder at the break.

The visitors came out for the second period all guns blazing and crossed the whitewash within two minutes of the restart through Brooks.

A minute later Cokayne registered the first of her two tries, the hooker burrowing over from a driving lineout. And her second score came a minute later as she fended off a series of would-be tacklers to dot down under the sticks. Brooks bagged her second try just past the hour mark, with Tuima converting to make it 47-17 to the visitors.

Ella Amory squeezed in at the corner to push Quins past the 50-point mark and Kildunne grabbed her second, racing onto a kick-through to slide over.

Moss scored her first Warriors try on 75 minutes to secure a deserved bonus-point for Jo Yapp’s side, however, back came the Londoners with Kildunne sealing her hat-trick.

Warriors had the last word, with summer recruit Ffion Lewis dashing from the base of a ruck to touch down for a converted try.