The countdown until Status Quo rock Sixways Live ’07 is getting ever closer with the stage now erected on the stadium pitch ahead of the musical spectacular on Saturday.

Legendary rock gods Status Quo along with top bands Insanity Beach, Funky Skunk and My Sergeant Mask will all be appearing on the bill at Sixways Live ’07 at the home of the Warriors (doors open 3pm).


With the clouds disappearing, sun breaking through and wet weather finally over, music lovers can still make sure are part of the music action by buying tickets to watch Quo from the Ticket Office at Sixways today from 9am until 6pm.

And on the big day itself we will be selling tickets from 9am until 1pm and from 3pm until 7pm at the Sixways Reception.

Staff have been working around the clock at Sixways preparing the stage and stadium under the supervision of Operations Director Mike Robins.

The PA arrives at the club on Friday morning and lighting will go up this afternoon as the stage is set for the big day.

And Mike Robins admitted he was delighted with the way preparations had gone with just a day to go until music fills the air.

“Despite the rain the pitch is looking fantastic and as an added protection we have covered it with roller-track which is non-slip and state-of-the-art,” he said. “The stage is also now fully built and looks amazing. It really gets the pulse racing ahead of the concert.

“Tickets have been selling well and the weather forecast for Saturday is very good so we hope a lot of people will decide on the day to come along, buy a ticket and enjoy a truly great night out. We are urging music fans to arrive early on the day with doors opening at 3pm and live music from 5.30pm, the atmosphere will be building all day long.

“With this concert we are setting the scene for the future and want this to be the first of many concerts at Sixways. We have overcome the bad weather to get everything in place and we want people to come and really enjoy themselves on the big day.” 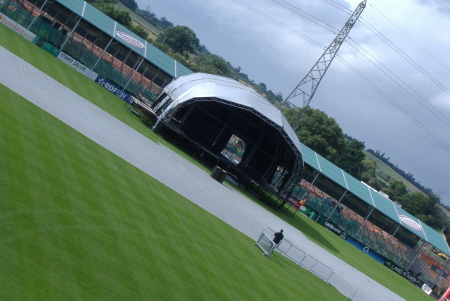