Mike Ruddock saluted his Worcester Warriors as they stunned champs London Wasps at Adams Park – and then urged his team to not drop their standards in the Guinness Premiership.


Director of Rugby Ruddock was full of praise for his side as they produced a stunning Sunday show to take the points.

And now he has told his side to keep producing the thrilling rugby as they prepare for the visit of Leicester Tigers next Saturday (September 20).

“I thought we deserved the victory,” said Ruddock. “It went down to the last kick and fair play to Loki. He has had a lot of stick in the past for missing the odd kick late on so it was a big moment for him.

“Loki has been working particularly hard on his skills and all that hard work came through so well done to him and well done to my team.

“It was always going to be tight away from home against a quality team like Wasps, but I asked the boys to really front up and take responsibility for their jerseys, the club, the chairman and the fans,” he added.

“I told them not to be afraid to play a bit of rugby and if we were to lose it would be because we had tried things. We felt against Northampton we started in second gear and stayed in second gear.

“Against Wasps it was important that we showed intent about us and create things. We created that last opportunity and Loki took it.

“To beat the champions in their own backyard creates a first – it was a significant achievement for us.

“However, we have quickly got to look at next Saturday and focus on Leicester, there will be a lot of anticipation now. We have seen the standard now from the boys and now we will challenge them to achieve that every week. It was a great effort and I’m very proud of my players.”

The only negative for Warriors was the sight of prop Chris Horsman limping off in the second half.

“It is an injury around the ankle where he has had problems before. We will wait for the medical report,” said Ruddock

“Chris has worked really hard to get back fit so he was delighted to be back on the field and get a start. It’s unfortunate that he has picked up an injury but hopefully it is not all doom and gloom.” 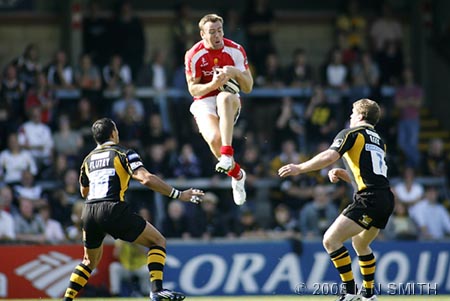