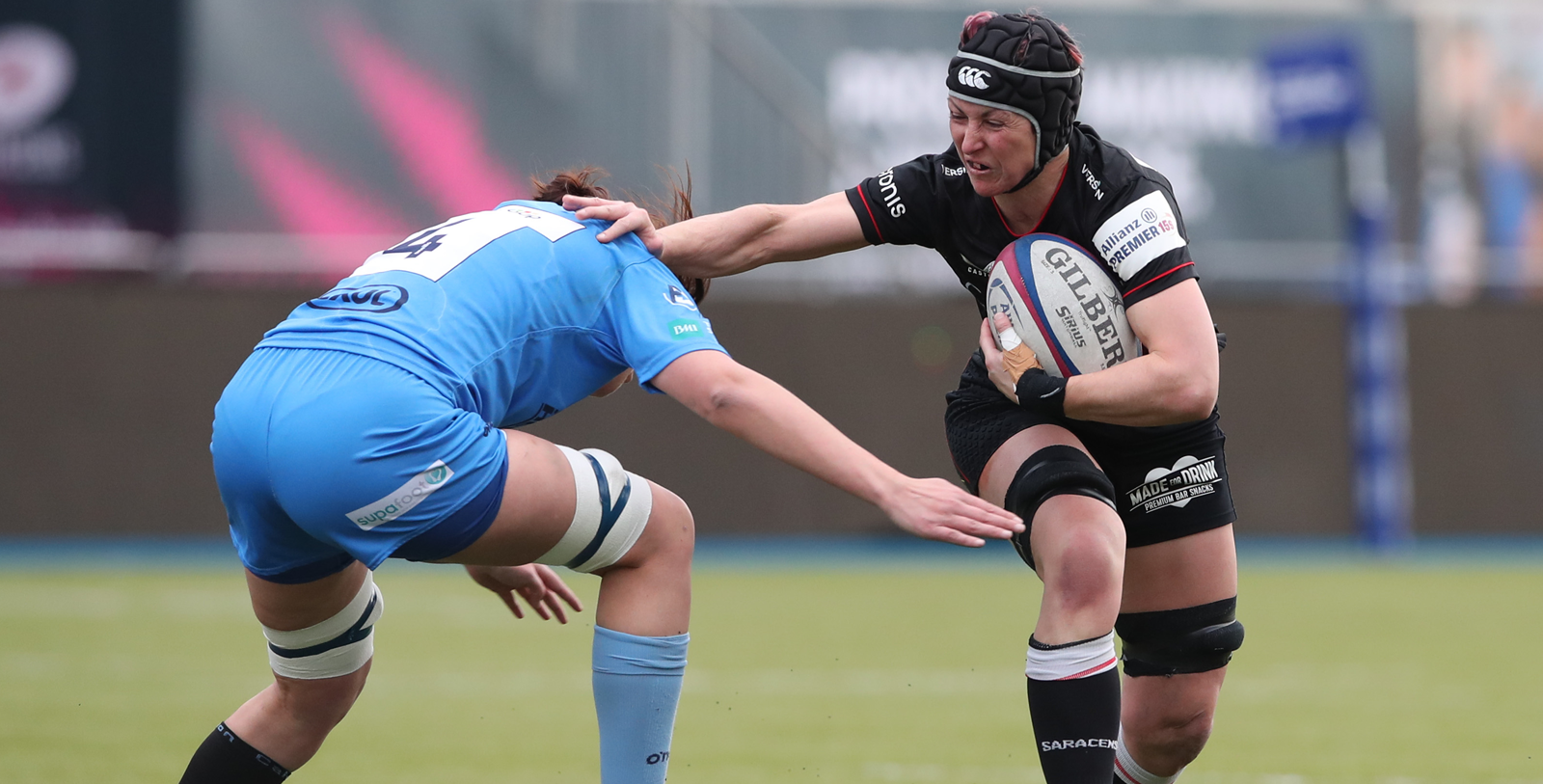 Trudging off the StoneX Stadium pitch in disappointment following an enthralling 39-28 defeat to table-toppers Saracens is a stark sign of how far Warriors Women have come under the guidance of Jo Yapp.

Warriors were just three points behind last season’s Allianz Premier 15s finalists going into the last ten minutes, only for experienced England campaigner Marlie Packer to suck the air out of the visitors’ hearts with her second score of the afternoon as the Londoners closed out the contest.

The match began with much promise for the Sixways outfit, quick-thinking on the blindside from Wales scrum-half Ffion Lewis unleashed Lydia Thompson to the try line for the opening score. Ellen Murphy’s touchline conversion fell short, but Warriors had the early advantage at 5-0.

In typical fashion, Sarries hit back immediately through Hannah Botterman, who palmed off a series of would-be tacklers to crash over under the sticks for a converted score. Props Botterman and Alex Ellis were causing mayhem upfront to get their side front-foot ball for large periods of the first half, the Sarries front line flexing their muscles all game.

Saracens doubled their tally of tries on 17 minutes courtesy of number-nine Ella Wyrwas, who scooted in from the base of a scrum and the home side led 14-5  following Harrison’s conversion.

Murphy cut the gap to 14-8 with a penalty just short of the half hour mark, before Sarries hooker May Campbell bundled over from a driving line out and then centre Alev Kelter secured the try bonus-point four minutes from the break. Warriors, undeterred by the margin of the 26-8 scoreline, kept the intensity going with the two Alex’s, Callender and Matthews leading the charge in the back-row, and their endeavour was rewarded with a Murphy penalty which reduced the deficit to 26-11 going into half-time.

Warriors came out for the second period all guns blazing, and four minutes after the restart Carys Phillips raced in under the posts to the delight of the visiting supporters. Edging towards the line with a dominant rolling maul, Phillips took the initiative, showing Sarries’ scrambling defence a clean pair of heels as she motored in. Murphy added the extras and it was game on at 26-18.

Again, Saracens, like a wounded animal came back at Warriors and were soon into the visitors’ 22 with a period of sustained pressure. Warriors’ set-piece started to creak as the second half progressed, Elizabeth Shermer seeing yellow for infringing as Sarries wheeled the scrum towards the try line.

From the resulting penalty, Packer went over for the first of her two tries with a catch and drive and Warriors trailed 31-18. Vicky Laflin went over for Warriors moments later – the explosive wing touching down in the corner following a sweeping attack involving Meg Varley, whose line break was the catalyst for Warriors’ third try of the game. Flo Long’s pass, with Laflin on the overlap, proved decisive – the Bristolian prop showing she has technical skill as well as her ball-carrying ability.

As the hour mark approached, Warriors continued to frustrate Sarries, with their trojan-like defence coming to the fore on a series of occasions. It was getting feisty and Saracens were showing their bite, keen to not let slip the good work they had done in the first half.

Laflin bagged her brace for the day on 65 minutes to spark jubilant scenes on Warriors’ bench when Murphy’s inch-perfect cross-field kick found the flyer who seems to enjoy playing at the StoneX. Cutting inside and sprinting clear, it was poetry in motion from Laflin, who showed excellent composure to cross the whitewash in style.

Jubilant scenes on our bench! 👏

31-28 to Saracens, it was all set up for an exciting finish and it was evident that the home side were eager to wind the clock down and get into the changing room with the five point win when Harrison elected to kick two goals, one of which was successful after Packer powered over from a driving line out five minutes from time.

At 31-28, Abi Kershaw made an unbelievable try-saving tackle – the Centre of Excellence graduate underlining the talent that has come through the club in recent seasons.