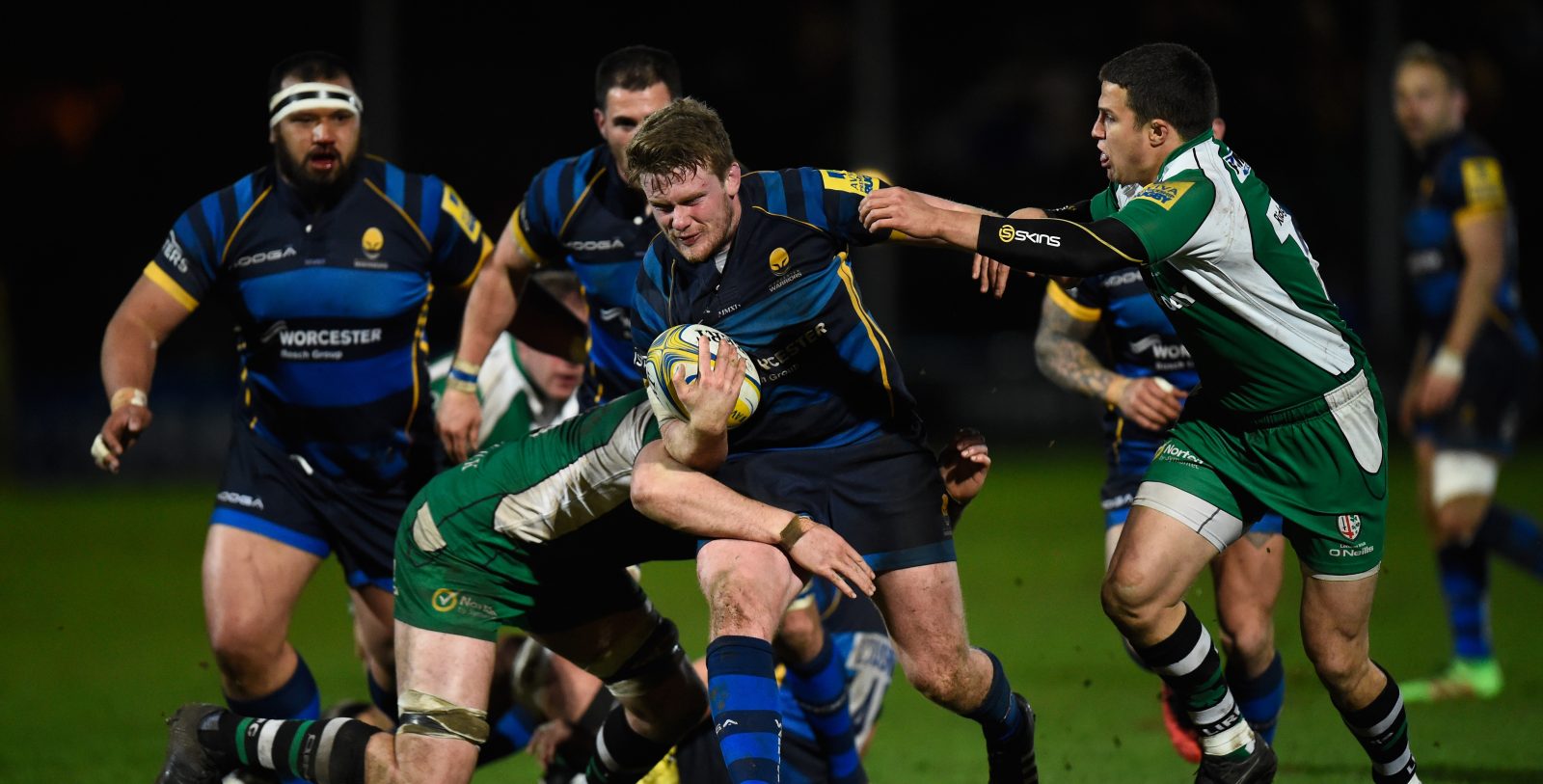 Warriors set a new Club record at Sixways as they recorded their fourth consecutive Aviva Premiership victory for the first time in their history.

On a wet day in Worcester, territorial rugby was the order of the day as running rugby proved nearly impossible.

After a slow start, it was Warriors who took the lead through Tom Heathcote’s penalty after 28 minutes before he doubled his side’s advantage two minutes later.

Heathcote put his side 9-0 ahead before Greig Tonks put Irish on the board with three points of his own.

Heathcote and Tonks then exchanged late penalties before Irish knocked-on with their last attack of the game to ensure the four points stayed in Worcester.

Warriors sprang into action after defending an early Irish attack as Bryce Heem nearly got on the end of a long kick forward from Ryan Mills before being deceived by the bounce.

Irish were enjoying much of the early possession as they illustrated their hunger to take four valuable points away from Sixways in a must-win game.

But Warriors staved off the early pressure and soon kicked a penalty into touch deep in the away 22 as they created their first real opportunity to score.

Niall Annett, GJ van Velze and Mills all made tracks towards the line before the hosts were awarded another penalty as they searched for a way through.

Irish, to their credit, defended well as they eventually forced a penalty of their own before clearing the ball.

The wet weather conditions meant running rugby was difficult to execute but it was Warriors who looked the more likely to open the scoring as they battled for territory.

And the hosts did take the lead as Tom Heathcote opted for a change of tactic and bisected the posts with a penalty from inside the 22.

Both teams would clearly have more luck from the kicking tee than they were having with ball in hand and Heathcote doubled his side’s advantage two minutes later with his second kick of the match.

The six-points settled Warriors’ nerves but Irish were looking to get their first points on the board and they soon charged down a kick from Mills before kicking a penalty into touch five-metres out.

But Warriors held strong as they repelled Irish’s attempts to make their way to the line.

And the hosts then raced from their own 22 to the opposition 22 after intercepting a dangerous-looking Irish attack.

But Irish looked resilient as the first-half wore to a close and Warriors couldn’t add to their tally as the sides turned around with the hosts 6-0 ahead.

The second-half began in the same fashion as the first as both sides struggled to retain the ball in slippery conditions.

And Irish had a guilt-edged chance to race in for the first try of the afternoon as they broke through the centre and had three players on one.

But as Ciaran Hearn received the offload in space, he spilled the ball forward with no one between him and the tryline 40 metres away.

That brought the attack to an end, much to the delight of the Sixways crowd, who continued to roar their side on.

And Warriors’ relentless work-rate was rewarded when they were awarded another penalty inside the Irish half, allowing Heathcote to step forward once again and dispatch the kick to give his side a nine-point cushion.

Francois Hougaard soon showed a turn of pace to burst forward and leave the Irish defence for dead before he was finally halted short of the 22-metre line.

The South Africa international was then the victim of a fierce push in the chest from former Warrior Blair Cowan as emotions started to boil over.

As time started to run out, Heathcote and Tonks exchanged penalties as Warriors moved 12-6 ahead.

Irish looked for one more attack as the clock ticked past 80 minutes but a knock-on meant Warriors claimed four points to move further ahead of the bottom two sides.