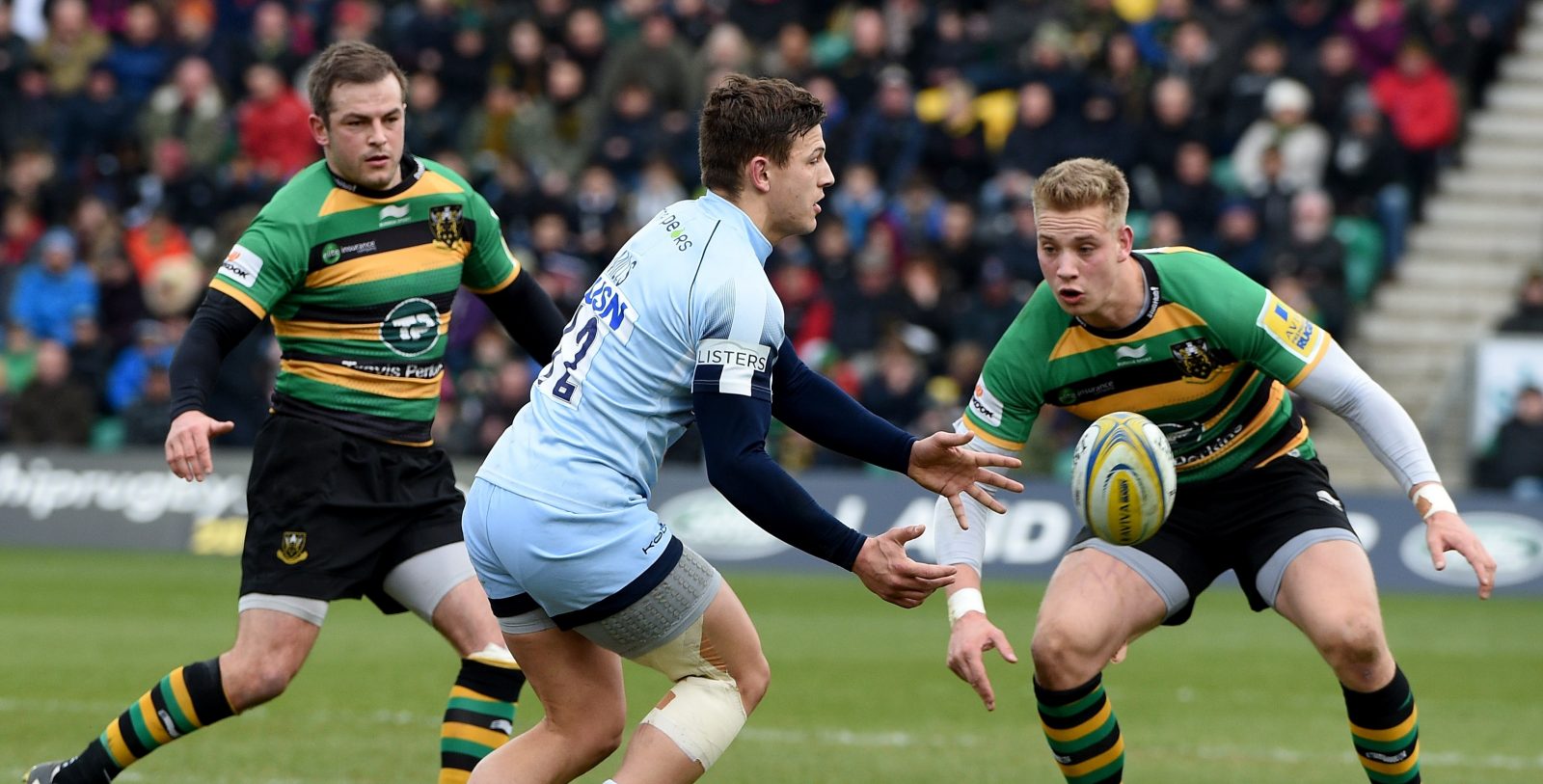 Warriors left Franklin’s Gardens empty-handed despite producing some of their finest rugby of the season against a relentless Northampton Saints.

A hat-trick from winger Tom Collins and an improved second-half performance ensured Northampton took all five points after Warriors had led at the interval.

Northampton soon found a way into the game as Harry Mallinder and Collins went over minutes apart from each other to put Saints ahead.

But the lead changed hands again before the break as Olivier touched down before Heathcote converted.

Saints looked a different side in the second period and retook the lead two minutes in through Collins’ second score.

Heathcote struck again for Warriors with another penalty before Jim Mallinder’s side started to dominate.

Lee Dickson found himself at the bottom of a driving maul to touch down before Collins claimed his hat-trick to put distance between the sides.

And there was no way back for Warriors as George Pisi confirmed the victory at the end.

Warriors Director of Rugby Dean Ryan named the same starting line-up and the same bench which orchestrated a famous victory over Sale Sharks last time out as his side went in search of back-to-back wins.

The visitors started well as Francois Hougaard charged down a kick from Stephen Myler inside the home 22 before Ryan Mills saw an early penalty attempt drift wide.

Chris Pennell illustrated Warriors’ hunger for victory with a crunching tackle on Collins in the opening five minutes as Ryan’s men showed they were not a side to be taken lightly.

But Northampton soon found their rhythm as Myler looked to control the game from the centre of the pitch.

And Collins nearly took advantage of a clever kick from the fly-half following good work from Mallinder before the winger was halted by Bryce Heem with the tryline at his mercy.

Saints piled on the pressure but Warriors defended superbly and alleviated the danger before Pennell kicked upfield to put the hosts on the backfoot.

And when Warriors forced Northampton to concede a penalty, Heathcote was able to give the visitors a lead with an early kick.

The Sixways side were starting to dominate proceedings as Olivier carved his way through the home defence before Heem launched a long ball out to Cooper Vuna, who was bundled into touch.

The Warriors backline was producing some mesmerising rugby and Heem, Vuna and Pennell were proving extremely difficult for the hosts to cope with.

But Northampton were looking just as potent when they had the ball in hand and the match soon became an end-to-end affair as the likes of Collins and Luther Burrell raced down either channel searching for an opening try.

And Collins almost got the first try as he was inches away from getting on the end of a grubber kick from Myler.

Remarkably the match stayed at 3-0 to Warriors till the half-hour mark despite both sides producing spells of mouth-watering creativity.

But the visiting supporters sensed a try as Warriors continued to assert themselves on the match.

Jaba Bregvadze put in Olivier following an away lineout and the South Africa international was inches away from touching down as he stormed towards the line.

And the visitors finally did get the opening try as Rapava Ruskin made the most of a well-worked lineout before strolling through to dot down unopposed in the corner.

Warriors were 8-0 ahead and playing some of their finest rugby of the season against last season’s table-toppers.

But they were brought back down to earth as Ken Pisi found a gap in the away defence before offloading to Mallinder, who raced down the wing to put Saints on the board.

Still Warriors pushed forward as the entertainment continued but they were dealt a huge blow when Darren Barry was forced off with an injury.

And Northampton stole the upper hand as Collins received the ball from Ben Foden on the left wing following a fine passing move and raced away to score.

Myler converted as Saints momentarily found themselves in the driving seat but it didn’t last long as Warriors were soon over for their second try of the afternoon.

Carl Kirwan did well to find Hougaard after an away lineout before the Warriors scrum-half teed-up Olivier, who raced into the home 22 and dived over the tryline to turn the score on its head once again.

And Warriors ensured they held a 15-12 lead at the break as Heathcote struck the conversion to give the hosts a three-point advantage.

There was barely time to settle into the second period before the scoring continued as Saints retook the lead two minutes in.

Northampton kicked a penalty into touch metres from the Warriors tryline and briefly flirted with a driving maul before scrum-half Dickson played the ball across the backline.

Burrell found space and launched a mispass out to Collins, who danced in for his second try of the match to give Saints a 17-15 lead.

Unfazed, Warriors continued to show their attacking ability and were inches from going over for a third try as Rapava Ruskin was held up on the line.

Warriors were awarded a penalty moments after the subsequent scrum and nudged into the lead once again courtesy of three points from the boot of Heathcote.

The visitors looked to hold onto their lead but clever kicking from Northampton put the hosts in good positions.

And when Myler kicked a penalty into touch, Northampton secured a bonus point fourth try as Dickson grounded following a driving maul.

Myler once again converted as Saints took a 24-18 lead with just over 20 minutes remaining.

The hosts stepped-up a level as Ken Pisi raced towards the tryline before being brought down by Heathcote just short.

Saints won a penalty and kicked into touch but Warriors somehow repelled the driving maul to stay within touching distance of the hosts.

The relief lasted only momentarily, however, as flanker Jamie Gibson found space before putting Collins away for his hat-trick.

Collins’ score was the hosts’ fifth of the day and Myler’s kick gave them a 13-point cushion as Warriors’ intense efforts throughout the match began to catch-up with them.

Warriors refused to surrender when Northampton saw a sixth try disallowed after Myler had blocked Vuna before Ken Pisi finished in the corner.

But Saints had too much for the visitors in the end and replacement George Pisi wrapped-up the victory with a final try moments before the end.