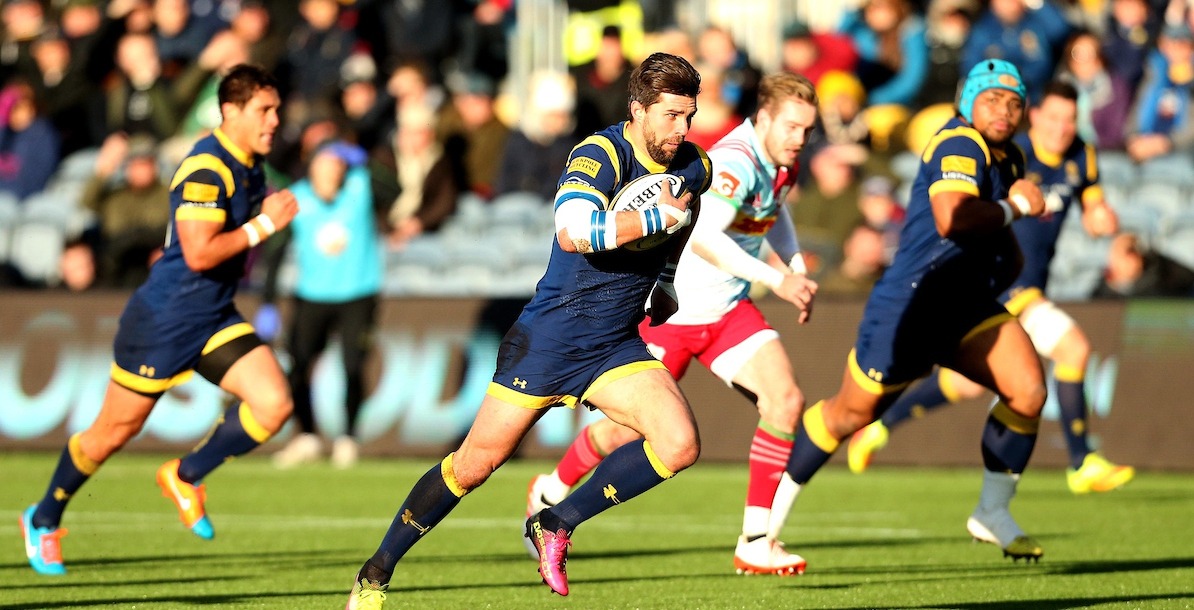 Harlequins produced a stunning second-half comeback to claim their third Anglo-Welsh win of the campaign as Warriors’ hopes of reaching the knock-out stages were all but ended.

Warriors raced out the blocks and were 14-0 ahead after just 11 minutes as Wynand Olivier and Bryce Heem touched down.

Harlequins got off the mark through Charlie Walker’s solo effort but Carl Hogg’s men went in 14-7 ahead at the break.

The hosts added a third try seven minutes into the second period through Joe Taufete’e before John Kingston’s men launched their comeback.

Charlie Matthews raced 40 metres to dot down before Alofa Alofa bundled his way over for a quick-fire double before Ruaridh Jackson’s conversion wrapped the game up for the away side.

Warriors named a strong line-up for their return to Anglo-Welsh Cup action as the likes of Jackson Willison, Phil Dowson and Olivier returned to the side, while Heem made his first appearance since December’s clash against Wasps.

And Warriors were ahead after just five minutes as Tevita Cavubati teed-up Olivier, who raced to the line and managed to slide over, despite being upended just short.

Warriors had started well and looked to dominate their London opponents as they searched for a second victory over Harlequins in less than a month.

And Hogg’s men soon had their second try of the afternoon as Willison raced down the left before offloading to Heem, who strolled in to touch down underneath the posts.

Ryan Mills had converted the first try and made no mistake with the second as the hosts raced to a 14-0 lead.

Harlequins had hardly looked to be in the game but scored a try out of nothing as pacey winger Walker found a gap in midfield before racing through the Warriors defence and dotting down.

Jackson’s conversion cut Harlequins’ deficit to seven points as the contest continued in its frantic fashion.

Harlequins tightened their defence as the half wore on and chances were at a premium as both sides fought for possession.

Warriors’ final chance of the half came on the stroke of half-time as Mills saw a penalty attempt from just inside the Harlequins half come back off the post.

Warriors looked to build on their lead after the interval and Taufete’e got in on the action as he found himself at the bottom of a driving maul to ground Warriors’ third.

That looked to have put the hosts out of sight as they went 12 points ahead – but Harlequins had other ideas.

The visitors soon cut their deficit once again as Matthews intercepted a loose pass and ran 40 metres to touch down underneath the posts.

And it was Harlequins who suddenly had the momentum as they went in search of another try to keep up their 100 per cent winning record in the competition this season.

And Alofa soon showed outstanding footwork as he twisted and turned his way to the line to draw his side level with just over 20 minutes remaining.

Jackson added the conversion as Harlequins took the lead for the first time in the match at 21-19.

Warriors continued to push forward and Mills nudged his side back into the lead with a routine penalty with 15 minutes to go.

But Harlequins would just not lie down and Alofa stole in for his second try with ten minutes remaining, before Jackson added the extras to put the visitors 28-22 ahead.

Warriors pushed for a fourth try but they just couldn’t find their way to the line as Harlequins went home with the points.