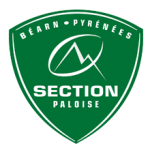 Warriors fought tenaciously before suffering their first European Challenge Cup defeat of the season in the rain at the Stade du Hameau.

Once again Warriors were ferocious in defence but two lapses at the start of each half proved costly as Pau’s former New Zealand fly-half Colin Slade nipped in for two tries.

Those tries apart, Warriors were a match for Pau in attack but they again lacked the possession to convert it into tries.

They had to settle for two first half penalties from Jamie Shillcock and the chance of a losing disappeared two minutes from time when Julien Blanc crossed for Pau’s third try while Warriors had both locks, Darren Barry and Andrew Kitchener, down and requiring treatment.

Warriors again got through another huge shift in defence and will hope that they can avenge this defeat in better conditions when Pau visit Sixways for the return on December 15.

The match was largely dictated by the weather. When Warriors had their captain’s run at the stadium in the morning there was not a cloud in the sky but by kick-off heavy rain had swept in from the Pyrenees and it continued throughout the match.

It made underfoot conditions difficult and increased the importance of retaining valuable possession, a point that was made quite emphatically after just two minutes.

A good carry from Andrew Kitchener was undone by a turnover and Pau were quick to launch a counter-attack which saw Slade cross for a try under the posts which he also converted.

Warriors regrouped and pulled back three points with a well-struck penalty from Shillcock after ten minutes and another just before the half hour which reduced the lead to a point.

Slade was short with a long range penalty attempt but Pau’s attempts to use their heavyweight forwards to batter their way to the line were frustrated by some tireless tackling from Warriors.

Warriors lost captain Wynand Olivier to a head injury assessment which gave Will Butler his first rugby of the season before Olivier returned just before the break.

The second half followed the same pattern as the first with Slade scoring after two minutes when he tapped and ran a penalty that Pau seemed likely to kick for goal.

Slade added the conversion but Shillcock’s 100 per cent kicking record in the tournament disappeared when he pushed a 56th minute penalty kick wide of the target.

Injuries also disrupted Warriors in the second period when hooker Isaac Miller made his competitive debut as a replacement in the back row.

Barry and Kitchener both had to leave the field after they received treatment for their injuries while Irish referee Franck Murphy waved play on and Blanc crossed for the deciding score which Antoine Hastoy improved.