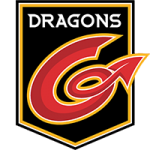 Warriors claimed a second bonus point win in three European Challenge Cup matches thanks to second half tries from Ollie Lawrence, debutant Noah Heward and Jono Kitto in a tense affair at Sixways.

Dragons had to play three-quarters of the match without their influential number eight Taine Basham who was sent off for a tip tackle on Gareth Simpson but the Welsh side proved very difficult to break down.

While Dragons had nine Wales internationals in their squad – seven of them in the starting XV – Warriors made 14 changes to the side that beat Sale Sharks and the sole survivor, Chris Pennell, lasted barely 15 minutes before he took a blow to the head.

With an inexperienced side and players playing out of position, Warriors did well to secure the win although they were never really at their fluent best.

It was Heward’s try, when he ghosted through from halfway 14 minutes from time which finally broke Dragons’ resistance and set Warriors up for the return at Rodney Parade on Friday.

The win capped a memorable day for Warriors loosehead Ryan Bower who led the side out on his 100th appearance for the club.

Warriors struck first when skipper GJ van Velze won a lineout and Tom Dodd took the ball into contact where Dragons were penalised at the breakdown and Jamie Shillcock kicked the penalty.

But Dragons hit back with a solo try from Aaron Wainwright who found a gap in the defence and powered over, inflicting further damage by flattening Pennell in the process.

Pennell went off for a HIA and did not return which meant a reshuffle in the back division witj Noah Heward moving to the right wing and Gareth Simpson taking over from Heward at full-back.

Sam Davies converted the try but Dragons soon lost Basham who upended Simpson and received a red card after Italian referee Marius Mitrea had consulted with one of his assistants.

Warriors made their numerical superiority count when Ryan Mills crossed under the posts after a long and patient attack.

Shillcock added the extras but Dragons drew level again after 33 minutes when Davies stroked over a penalty.

Back came Warriors with another attack which forced Dragons to concede another penalty under pressure and Shillcock took the opportunity to collect three points to regain the lead just before the break.

Dragons regained the lead six minutes after the break when scrum-half Rhodri Williams went over from a sniping run and Davies, who missed the conversion, then added a penalty.

But Warriors began to play with greater cohesion as the game went on and their decision to scrum a kickable penalty was rewarded when they worked an overlap for Lawrence to dot down.

Davies kicked another penalty to nudge Dragons back in front but Heward then conjured a try from nothing to cap a memorable debut.

Kitto, who had just come as a replacement, rounded off a flowing attack to grab the bonus point and Shillcock banged over the conversion in a flawless kicking display.

There was time for replacement scrum-half Luke Baldwin, on a season-long loan from Warriors, to nip in for a try that Davies converted to salavage a bonus point for Dragons.